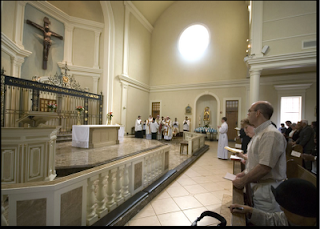 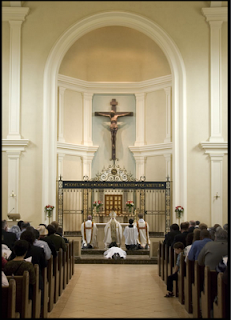 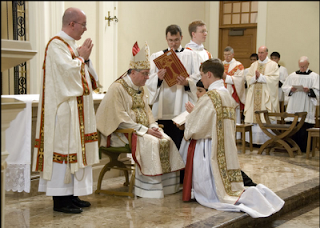 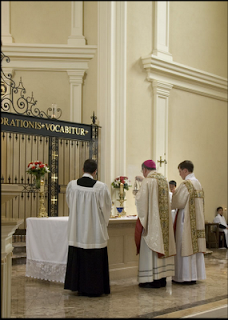 The practice of celebrating Mass ad orientem seems to be spreading encouragingly. The Toronto Oratory have now had a diaconate ordination (of Br. Michael Eades — many congratulations) celebrated by the ordinary in their splendid new church, facing East and in Latin. Churches like the London Oratory have been able to maintain a tradition for facing God, but it is very difficult to (a) start one and then (b) persuade the bishop to go along with it. There are more pictures here.
Someone now needs to buy them a big set of six candlesticks and cross.
Posted by Pastor in Monte at 09:13

The question in my mind is this: "What would Pope John Paul II have thought of all this return to mediaevalism under Cardinal Ratzinger?" I am not a Roman Catholic, and I apologise if my question causes offence to anyone - that is FAR from my intention. I mean my question very genuinely, and at face value. I ask, because I perceived Pope John Paul II to be an immensely holy and very special man, of deep piety and devotion, and profound wisdom. I was an enormous admirer of him, and I am genuinely interested to know what you think his opinion would have been on all of this, were he still with us today.

Your question, Anonymous, is an important one for our age. No, your question certainly has not caused offence; it only makes me feel, to a certain extent, nonplussed, precisely because it is hard to know how I might give an adequate answer in a short space. Perhaps I can only address certain aspects of what you ask.
1. I think that we need to rid ourselves of one of the fallacies of our age: that everything that is new is good, and everything that is old is bad. What you call ‘Mediaeval’ is something that has existed, broadly, for 1500 years of the Church’s history, right until 1969, and has formed generations of saints and scholars. What is ‘good’ one day cannot become ‘bad’ the next morning (as, in fact, the Holy Father has said). People do not change that much: they need the same things. People in 1500 needed fresh vegetables; we need fresh vegetables today, however much nicer McDonalds burgers may taste (in some people’s opinions).
2. Pope John Paul was a highly energetic man with a deep and communicable passion for our Lord and his Church. In this, I sincerely believe that he would very much approve of what Pope Benedict has done. But your question touches more on their respective styles:
3. Pope Benedict is not a great public performer (in the best sense) as was Pope John Paul. I remember when, at the Youth thingy at Cologne, a few months after his election, people started to shout his name, he put his finger to his lips and pointed to the sky. ‘All glory to God’ seemed to be what he was saying. And this is one of the primary issues of his pontificate. In his preaching, in his encouragement of more, well, transcendent styles of liturgy, he encourages us to look away from ourselves towards God. From the 1960s onwards, we have been encouraged to express ourselves, put ourselves at the centre of things: I honestly believe that Pope Benedict realizes, in that phrase St Paul records our Lord saying, that ‘it is more blessed to give than to receive.’ In a liturgy that gives to God, we are the actual beneficiaries. Whereas when we celebrate a liturgy about ourselves, nobody in the end benefits nearly as fully.
4. It would be a nonsense to suggest that Pope John Paul would disagree with this. As you write, he was ‘an immensely holy and very special man, of deep piety and devotion, and profound wisdom’. But he saw other priorities. And they were the things he has bequeathed to the Church. He also very much valued the contribution the then Cardinal Ratzinger made—otherwise he would hardly have kept him in office when the latter made so many pleas to be released into retirement.
There really is lots more I could write, but it wouldn’t really be easy to squash it into a comments box. I hope this has helped.

Yesterday I had a long discussion with an old friend when the conversation turned to the Mass and I could not help mention the Pontifical Mass in London on Saturday which I attended. Being still on cloud 9 I tried to explain my feelings to her but she expressed her horror that I was so delighted by the ceremony.

My friend asked me whether the Mass was in Latin and when replying in the affirmative she said that in her opinion this was a backward step and said that as we did not eat the same food as we did 20 years ago, then why should we worship in an ancient tongue.

Needless to say I was flabbergasted - here we were, both Catholics but with a wildly different view of worship. When I mentioned that I now went to Mass in a parish where I was once again after so many years able to sing the Credo, Sanctus etc in Latin, and where the Priest now celebrates Mass ad orientem twice a week, she in turn was horrified.

I also mentioned how pleased I was to be able to sing again some of the old Catholic hymns and in particular 'Faith of our fathers' which always moves me deeply. At this my friend put her head in her hands and groaned ! 'We sing wonderful modern hymns in our church' she said and have an international Mass when different people read prayers in their own language.' She did not see the irony in not wanting the latin but enjoying listening to French, German, Swahili etc!

My friend has suggested that I accompany her one Sunday to 'bring myself up to date'. However I do not wish to end our friendship which goes back more than 40 years when we both attended the same parish - and sang the Credo etc in Latin!

Wouldn't it be true to say that the present Holy Father is consolidating and finishing the work of Pope John Paul II?

The aftermath of Vatican II got off to a bad start because of the social and political turmoil of the western world. Pope Paul VI maintained the substance of the Catholic faith but was thrown by the advent of a secularist society. Pope John Paul II had the strength of purpose to implement Vatican II as the Fathers of the Council intended and challenge atheistic secularism but he could not do everything.

Pope Benedict XVI was as much part of the Council as his predecessor, knew what the intentions were, and where the bodies are buried. Liturgically he is rounding off what John Paul II accomplished doctrinally and also strengthening the magisterium in the same way that he did. I believe that their pontificates should be seen as one.

I like the Latin Mass for special occasions but I can't see what's wrong with the English Mass in general which I feel I can participate and enter in to fully into this Mass. Surely it is a 'heart' issue not a 'style' issue. It all seems like 'romanticism' to me. PS I am a Catholic