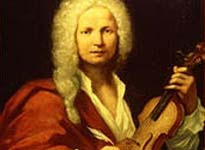 I have never been a particular fan of Antonio Vivaldi's music, being one of those who are inclined to think that instead of writing several hundred concertos, he wrote one concerto several hundred times. Works of genius, though, there undoubtedly are; the Four Seasons, despite being overplayed and Nigel-Kennedied to death, are nevertheless astounding pieces. And his operas are terrific, too, though I've only heard extracts. I suppose that because he was writing for a school, he had to limit his music to his performers. Which is where I come to the point of this post.
I saw last night on the often-interesting BBC4 channel a documentary called Vivaldi's Women. It was all about the Pietá in Venice, a refuge for abandoned children, where girls and women would often spend all their lives. Around the time of Vivaldi, these unfortunates achieved a wonderful standard of musicality, and people would flock to hear them sing and play from behind their iron modesty screens. In this programme, they attempted to recreate the sound with a female choir and orchestra from England singing in the Pietá church. They demonstrated convincingly that women could provide all four choral parts—even the bass—without the necessity of importing men. And in a sense, what was most impressive was that they managed to get through the whole hour without suggesting even slightly that Vivaldi (or anyone else) behaved in less than a priestly fashion towards the women, or that the Pietá was anything but a good and charitable refuge and home for these unfortunates.
Very sadly, I see on the BBC website that this documentary is not available on iplayer: if it had been, I should have posted a link so that you could see it for yourselves. But here is a link to a site that will tell you a little more, as well as letting you hear the choir and orchestra that was assembled for the occasion.
Posted by Pastor in Monte at 17:31