Today, the martyrology tells me, is the feast of St Columba, or, as I know him (because this is the way he is known in Kells), St Columcille (the second c is pronounced hard—colum-kill). So I thought it was a good opportunity to reflect a little on the town that preserves his memory.
Kells is a midlands town on a steep hill rising above the almost ridiculously green and fertile fields of County Meath. They will tell you that it was a monastic site founded by the monks of Iona fleeing the Vikings in 804, but in fact many strongly suspect that it is much older than that. Its very name derives from Ceann Lios (anglicized as Kenlis > Kells), a variant on Ceannanus Mór, the name it bears officially now: both mean 'head fort' (and the local nobs established nearby the Headfort estate, now a posh school). This is an unlikely name for monks to have given a monastery, and the steepness of the hill makes it a good place for a stronghold.
The monks would have built for themselves their usual arrangement of small churches, beehive huts to live in, a round tower for security, and the usual appurtenances of Celtic monasteries, especially the famous 'Celtic' cross in the grounds. Kells is unusual in that it has no fewer than five high crosses. 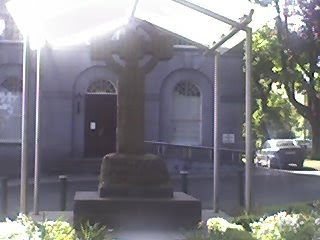 This, above, is the Market Cross. I remember it standing at a crossroads in the middle of the town. Every couple of years a lorry would back into it and knock it over. They would simply stand it up again. Finally, they carted it off to stand for years in a warehouse in another town until they turned the grim old courthouse (above) into a museum and put the cross under a little baldachino in front of it. The cross isn't unaccustomed to abuse, though. Cromwell's men, appallingly, used it as a gallows. 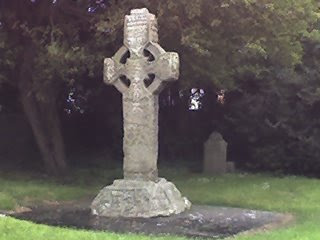 This, and the other crosses, stand in the churchyard of the Anglican church of St Columba, on the original site of the monastery. This is the best preserved, standing under the round tower. 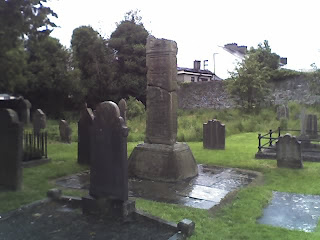 There is only a stump left of this one.


And this one was never even finished. There are panels of stone left proud, waiting to be carved. Which shows that these crosses were carved in situ, and not brought finished from a workshop somewhere. 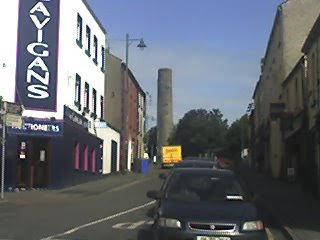 And here's the round tower. The trees are in the churchyard where the crosses are to be found.

The most splendid early building, though, is probably what they call Columcille's House. They think it is tenth century or earlier, though certainly not where Columcille lived—as far as we know, he never lived in Kells. One suggestion is that it was built to house and protect the relics of Columcille when they were brought to Kells from Iona. At any rate it is very sturdily built, and has two little chambers in the roof, accessible only by ladder. You will be told that this was a dwelling place for monks. Rubbish, in my opinion. Who would live there when they had a nice cosy beehive hut? Clearly, it was an inaccessible storage place for the most precious bits and pieces. You'd have a job getting in there, even today, if someone took away the ladder. 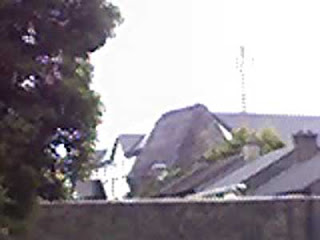 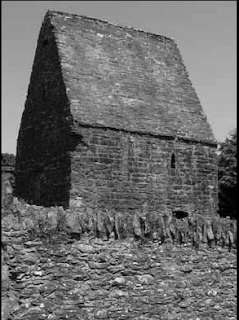 The Anglo-Norman family, de Lacy, built a castle in Kells, no doubt a successor to a Carrick fort, of which no traces remain above ground today. The whole town was fortified, though there is only one bastion remaining of the mediæval town walls—I took a picture, but it was hopeless.

The (Anglican) church of St Columba has been rebuilt several times, and the present building is uninteresting except, in a mild way, the tower. The notice stresses that the bishop who built it was Anglican—in a way, he was, since the building took place in 1578, and Kells falls well within the Pale, the area that England considered was hers at the time. But in Ireland, nothing is ever simple. I don't imagine that the bishop thought himself anything but Catholic—it wasn't until the massacres of Cromwell, really, that issues became clear. And in fact, I found this inscription which dates from the same year, and no doubt formed part of the church that the good bishop built; you can clearly see a reference to prayer for the dead: 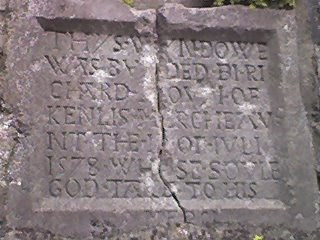 Now, here comes my beef. I hope I have established my case that Kells has to be considered one of the most interesting and historically important towns in Ireland. But the thing that really seems to impress the Kells town council is the fact that Kells has won the County Meath Tidy Towns competition a couple of times in the 1960s. Go back to the pictures of Coumcille's House. You can see, especially in the second pic, that it is an attractive and interesting building. But look at the first. I took it with my phone, again, but you can see that right up against it has been built (in the 1980s, I think) a vast horrible police station (successor to the equally horrible—and vastly more intimidating—aptly-named 'barracks' that dated from the occupation). If you want to see inside this amazing ancient monument, incredibly, you've got to chase down a lady who keeps the key.
Huge quantities of traffic roar through the little streets of Kells; vast juggernauts from the North shake the foundations of the little houses, jam up the junctions, and run over the locals. Only today are they finally getting around to building a by-pass. The town officials simply don't seem to find Kells interesting, or see that something could really be made of the place. It is better than it used to be (the conversion of the courthouse into a museum is a good start), but there is so much more that could be done. I wonder if there has ever been an archaeological dig there? Most of the stuff will, of course, have been built over, and the ancient monastery has generations of graves where the beehive huts were. But isn't there something that could be done? By Time Team, for instance.

I took these two photos in my Aunt's garden. Her watering cans are sitting on a piece of ashlar that came from something. The Norman Castle? The town walls? A Georgian house? 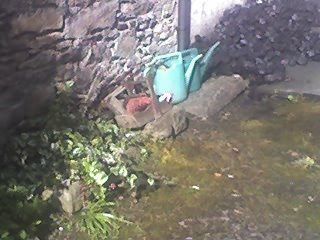 And this wall is massive; very solidly built for no apparent recent purpose. 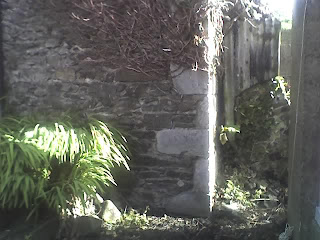 As a sort of final claim to fame, the words to The Red Flag were written by one Jim Connell of Crossakiel, just outside Kells. Well, there you go.
Posted by Pastor in Monte at 08:37

I'd like to see the aunt, not her garden wall!

Because of the quasi-military nature of the Royal Irish Constabulary, it's one of the curiosities of Hibero-English that 'Barracks' and 'Police Station' are still synonyms.

This brings back memories of a very happy long weekend chasing high crosses in '06. The crosses at Kells are amazing, but I know what you mean about the town. If you want atmosphere, go to Galloon. The crosses there are just stumps now, but get there when the sunset's reflected in the lough and the swans are flying overhead, and the centuries just fall away ...

Fascinating - thanks for the post. I have travelled around Kells several times, but not yet had a chance of visiting. Only one argument with your commentary - prayer for the dead may be found repeatedly in mainstream Anglican tradition up until the time of Cromwell; only from his time onwards did it become a minority/underground Anglican practice until its full restoration in the Victorian era. Therefore I'm not convinced you can use it as evidence in relation to the Bishop whose stone is at the Anglican church - even though your conclusion may well be correct anyway!

What !
No mention of the Book of Kells ?

It was kept in Kells from the Middle Ages until it was removed for safe keeping in 1650 (1651 ?) when Cromwell's troops occupied the town.

Mind you, I can't see the Board of Trustees of Trinity College, Dublin, ever agreeing to give it back. It is, after all, a national treasure. And they do take good care of it.

All these posts from Eire make my heart ache for that dear land (and for the people, the Guinness, the rain, and oh, so many things).

No, I didn't include it. In fact it didn't occur to me to do so—the book was probably not made at Kells, and is no longer there anyway. There's a facsimile in the Anglican church, though. But I do agree that it is really a wonderful creation.