Oh my; whatever next? 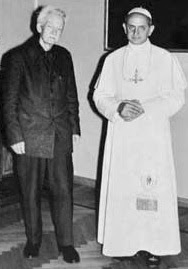 I found this on Fr Z's page, itself borrowing from Chiesa.

On January 12, [1967] Cardinal Journet wrote to Maritain to tell him that he would soon be meeting with the pope, in Rome. Neither of them knew that Paul VI intended to enact the Year of Faith. But Maritain confided to Journet that a few days before, "an idea had come to me," which he describes this way: "The Sovereign Pontiff should draft a complete and detailed profession of faith, in which everything that is really contained in the Symbol of Nicea would be presented explicitly. This will be, in the history of the Church, the profession of faith of Paul VI."
Although Maritain did not ask him to do so, Journet photocopied the philosopher’s letter and gave it to the pope, when he met with him on January 18. On that occasion, Paul VI asked the theologian for his judgment on the state of the Church’s health. "Tragic," Journet answered. Both he and the pope were in shock over the publication in Holland, one year earlier and with the blessing of the bishops, of a new Catechism aimed at nothing less than "substituting one orthodoxy for another in the Church, a modern orthodoxy for the traditional orthodoxy" (a comment from the commission of cardinals instituted by Paul VI to examine the Catechism, of which Journet was a member).

I find this quite shocking. Not the thing in itself, I mean, but that in 1967 Paul VI knew what a state the faith was in, and yet despite this still pressed ahead full pelt with his programme of reforms. Or didn't care. Or had let go of the steering wheel.

Still to come were, among other things: the 1967 recension of the Missal. The new Eucharistic Prayers. The Novus Ordo. The new Ordination rite. The suspension of the minor orders. Standing Communion. Communion in the hand. Lay ministers of Communion. The new Calendar……

Clearly Paul VI can't have been very shocked by the Dutch Catechism or the state of the Church, or else it might have given him pause to think about these other things before he signed up to them. I think his shock must have been along the lines of 'Oh my; whatever next?' .

I have thought a lot about the chaotic, one might almost say anarchic, state of the Church in 1967. Most obviously to the laity, liturgical anarchy had taken hold in Holland, France and Germany, and there seemed no stopping it. A new theology and ecclesiology seemed to be attempting to replace the old. Everywhere, old certainties were being challenged by speculative new ideas.

No one had yet seen, let alone condemned, the massive damage being done by so rashly rejecting the Church's past. Bishops and priests seemed eager to join the theologians in jettisoning centuries of tradition as so much outmoded and useless rubbish. The few dissenting voices made little headway.

Could Pope Paul VI have put a stop to all this by halting all further reform ? I rather doubt it. He would have been ignored by the reformers. I would describe his position as analogous to that of the pilot of a crashing aircraft : seated at the controls, staring ahead with horror, unable to do anything about it.

Well, in 1968, the year of revolutions, Paul VI did at least do something. He did publish the "Credo of the People of God" which gave some of us a sure point of reference in the surrounding chaos.

It was the voice of Peter, telling us that the Church still taught and believed the Catholic faith.

Of course, I told them they were talking rubbish. This simply put me in the minority of "blinkered traditionalists". It did nothing to stop people, ordinary men and women, arrogantly proceeding with their own agenda. And if rules and regulations, and orthodoxy and tradition stood in their way, then away with the lot ! It was like I imagine the French revolution to have beeen.

The false "spirit of Vatican II" had yet to be fully unleashed. Today, forty years on, we can look back on its effect : the massive drop in Mass attendance, the collapse of the Catholic family, the poisonous nonsense being fed to children in Catholic schools, the precipitous decline in vocations, the closure of churches and religious houses.

Now that the damage is done, it is possible to see, and understand, the hermeneutic of rupture, of discontinuity, condemned by Pope Benedict XVI in December 2005.

Now it is possible to see how the policy of aggiornamento was a disastrous failure, and how Pope Benedict's policy of ressourcement can be a success.

Oh, I think Paul VI would have been shocked if he had lived to see the clown Masses, the potato head liturgies, the "stealth priestesses". He undeniably abolished many traditional practices, in what can only be described as a philistine way, and promulgated the unfortunate Novus Ordo.

But was he in the vanguard of progressivism, or was he trying to introduce reforms more soberly ? Was he in control, or was he being led ?

After his "smoke of Satan" speech, I shall always wonder.

I find reign of Paul VI almost incomprhensible, not just that he should be insensible to the beauty of Catholic Tradition, but that he should have the courage to dispose of so much. Either he was a man of very strong convictions, or the other posibilities hardly bare speaking aloud. At some point we will have to decide whether he was peculiarly susceptible to manipulation and if so by whom, his fellow men or something more sinister. As we know he himself said he felt as if the Smoke of Satan entered the Church. If we accept that this happened then the consequences are astounding.

As I have always maintained: Paul VI did carry out the auto-destruction of the church, with full force and knowledge. According to Archbishop Lefebrve, he was a man of contradiction: trying to reconcile Catholicism with modernism and liberalism. Cardinal Noe said that Paul VI, accepted the liturgical reform "with pleasure". So when Cardinals Ottaviani and Bacci had written their detailed complaint of the new rite and it's glaring deficiencies, Paul VI decided to ignore them completely.

Michael Davis said that Paul VI also knew of the questionable affiliations of Archbishop Bugnini to certain secret societies, but only did something about it (rather too late) when a traditional Cardinal threatened to go public about it. When Cardinal Gagnon compiled a dossier on which prelates were active in subverting the church, Paul VI refused to accept him in an audience. Even when Dietrich von Hildebrand asked to meet Paul VI to tell him what was underway in Europe, he was just brushed aside like a nobody.

This is one of the many reasons, why Paul VI should not be beatified. The only people who would cheer such a thing, are the very same people who wave two fingers to Pope Benedict's motu proprio and general reforms to revitalise the church.

the owl of the remove said...

Having been rather quiet for a time Father, you have rather excelled yourself with some wonderful posts. You put my feeble efforts to shame - however, I am trying to move parishes in two weeks,before flying home to England, so perhaps I shouldn't feel guilty!

Pope Paul VI is an enigma but I suspect he was trying to give Vatican II a chance without fully understanding, or expecting, the social upheaval of the period immediately afterwards. No time for implementing the Council could have been worse. It probably took all the bishops who assembled for the Council by surprise too. But remember that he said before the Council that it would stir up a hornet's nest and, should he have succeeded Pius XII (which some in the Conclave wanted, even though he was not then a cardinal) it would have never happened.