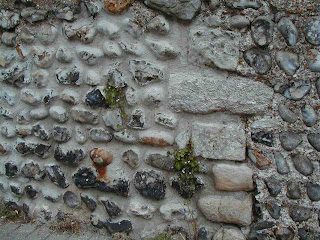 This is a photo of the street side of my garden wall. If you look carefully, you can see, against all possible probability, that two small, pretty, plants are growing in the wall, and even in the area which has been recently pointed and therefore cannot be expected to be able to support plant life.

In a similar vein, I am just astounded to find, apparently strong and vigorous, however small, the survival of something that I honestly thought could not live at all in such barren soil. I'm referring to intelligent, Rome-regarding (for want of a better word), Anglo-Catholicism in the Church of England. Which is why I'm putting links to a couple of sites on the left, so you can see for yourselves.

I was told at a recent wedding of a dear friend in London (amazing music—Spem in Alium, and the couple went out to the Cavelliera Rusticana Easter Hymn) that this blog is occasionally read by students at St Stephen's House in Oxford. (Hello chaps, if you happen to see this.) I remember smiling politely but sceptically —I wondered what possible interest this blog might have for such people. If they had any interest in the Church of Rome, surely they would have found the C of E no longer a congenial home. Broad Anglo-Catholicism, I knew, had survived. The Society of the Holy Cross, for instance, still supports male clergy, the seven sacraments, the creeds, the Western rites celebrated decently &c., but what my friend the late Brian Brindley (and, by the way, if you were wondering where the famous cottas are, I've got two of them, including the Marian one, though I don't have the chutzpah to wear them) would call Papalist Anglicanism—well, I thought that was well and truly dead. And so did he. As I was writing this, a comment was made on the last post saying, a little grumpily, 'As an Anglican I must say I have no desire to be in communion with the Roman pope - closer ties with Orthodoxy yes but not with Rome.' That's more or less what I'd expect.

So imagine my surprise at finding, courtesy of the Hound of Heaven (woof!), that Romano-Anglo-Catholicism is still alive. But what has touched me more, in a way, is discovering in it a regard for our present Holy Father very similar to my own. Pope Benedict seems constantly to be bringing surprises. He has built far stronger links with the Eastern churches than we have seen since the Council of Florence. And now it seems he is able to reach into the churches of the Reformation, too. These people resonate with what he is saying and doing in the Catholic Church. This can only be good. So I've established a 'separated brethren' link box on the left. I'm not endorsing everything they might write, but I think you'll find some interesting stuff there.

And now, do I pray that these people be converted to Roman Unity as soon as possible, or ask God to delay it a little so that they can bring more people with them?
Posted by Pastor in Monte at 10:41

As somebody who has moved from clerical life in the CofE to the heights of being the MC for Brian Bridley's Requiem (I remember the day with joy)we must ask these Romano/Anglos what Leo XIII would think of them and they of he. Brethren, come over because even when it isn't pretty it is at least true.

I think the plant on your wall is probably Teucrium chamaedrys, the Wall Germander.

Thank you for the link, Father; it will be returned.

A corporate solution is, to the vast majority of us, the idea. We do, indeed, want to "come home to Mother" but we want to do it with as many of the family as we can.

I am amazed that 'Anglican Papalism' survives in the Church of England on anything but a self-interested basis. It has no logic, no context, no credentials, no pastoral application. It is merely an adopted style, nothing more, nothing less. Of course it will continue because it provides a living, an income, a house, and the ability to pick and choose on a purely selective basis for the clerics who adopt it. They are no better than confidence tricksters but that appellation would not worry them in the least. But it is completely parasitic and deceives nobody. Let the dead bury the dead.

Come, come. Surely we can at least maintain charity, even when we profoundly disagree.

Thanks indeed. I'm sorry I have only just found this comment.

PLEASE CONTINUE TO PRAY as we do for you every time our knees hit wood/marble or, occasionally, faux-leather hassocks!