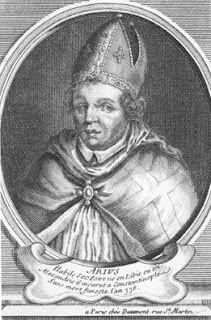 Well, I guess it had to happen. I have often thought that many modern-day Christians have more than a little taint of Arianism about them. Arius (3rd-4th century Alexandria) was an enthusiast for the prevailing sentiment in the East that to assert absolute equality in the Trinity was, as it were, to disrespect the Father. He took it to extremes, however, and sparked a revolution. I think many nowadays think that Jesus was goddish, but not God Himself.
Anyway, Arius has found new disciples—not quasi-Arians, but the real thing (they think). Have a look here, and start rubbing your eyes. H/T Love of your love.
I don't know where the Arian site got the picture from, but Arius was never more than a presbyter.
Posted by Pastor in Monte at 08:17

Amazing! I was so tempted to download the 'Clergy Application Form' and apply for an Arian bishoprick. I hope their 'clergy' refer to themselves as the Anti-Nicene Fathers.

There is a bizarre letter in this week's Catholic Herald from Prof. John Rist, who really ought to know better, comparing the SSPX bishops to the Arian bishops of the fourth century. Somehow I can't see Econe and the neo-Arians getting on terribly well, though.

In any case, why import this funny North African heresy when we have some fine homegrown heresies of our own. I shall shortly be auctioning episcopal sees in the One Holy Pelagian Church of the British Isles.

Yours, by the grace of God ... ahem ... by my own unassisted efforts, Metropolitan Archbishop of Britannia Secunda, Mar Benjamin &c. &c.

I too wondered about this picture of Arius who was never a bishop.

The picture is anachronistic, anyway, given that the mitre in this form probably did not evolve until circa the tenth century.