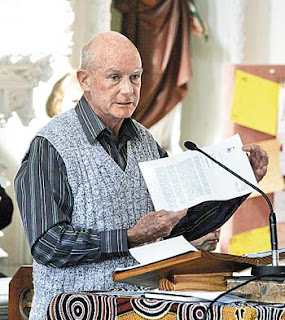 "Can you possibly think any individual can believe that Jesus was born of the Virgin Mary?"
Thus saith one Fr Peter Kennedy, the parish priest of St Mary, South Brisbane, Australia, who is outraged that his Archbishop wants him out of his parish where he has been carrying on a rather different sort of Catholic priesthood for some years, baptizing 'in the name of the creator, redeemer and sanctifier', presumably because the Father, Son and Holy Spirit are sexist, ceremonially uniting gay couples and encouraging a buddhist prayer group.
Right now he has been invited to leave his parish, but is resisting with the backing of a large number of parishioners. There comes a point, as John Bathersby his Archbishop suggested, when you wonder what the limit is, when somebody has actually left the Church without having to be chucked out. Archbishop Lefevbre never uttered a heretical word (I should think), and yet was treated with far less consideration than Fr Kennedy has to date. And who will be shown to have been, sub specie aeternitatis, the greater threat to souls?
In the end, is the Church what we receive, or what we choose to make of it? This is the ultimate difference between a Catholic and, well, not a Catholic. Is our Communion from the Apostles, or from us?
Posted by Pastor in Monte at 07:04

Don't mess with the Sacraments...Fr. Kennedy has done far more damage than Abp. Lefevbre. 100's of thousands of babies were invalidly baptized, and even worse, other Sacraments could of been invalid. Those are souls not properly nourished.

In the case of Abp. Lefevbre he didn't mess with the Sacraments, just did them the Traditional Way and was treated with such ridicule.

Prior to the 2nd Vatican Council,was our communion from the Apostles, or us...?
It seems to me that Vatican 2 opened the windows through which chunks of truth seemed to disappear; thankfully, much of it is resurfacing, at least in the Catholic blogosphere!
Thanks Fr., for a very thought provoking post.

The greater threat to souls is the man who performed invalid baptisms. Just think of the consequences of that.

Fr. Kennedy seems to have abandoned the Catholic faith. They say he has the backing of a "large number" of parishioners. Well, he has led them astray, too, and that is a terrible thing.

Archbishop Lefebvre acted as he did to preserve the Catholic faith.

He invented no new doctrine, no new teaching, he only taught what he had received, the Catholic faith.

Things went very wrong in the years after Vatican II, but, as far as I can see, the fathers of Vatican II taught no new doctrine either, and never mandated anyone else to do so.

"In the end, is the Church what we receive, or what we choose to make?"

Exactly, Father! Fr. Kennedy, like others who have strayed from the Faith, appears to take solace in the fact that a majority of his parishioners support him.

But the Church is not a democracy where the will of the majority rules. Something the Holy Father warned about a long time ago: "A faith we can decide for ourselves is no faith at all." ("Truth and Tolerance")

It's interesting we do live in a let's play nice world. I don't. I try to be nice I really do. But, a little common sense tells me that all he needs is a good life threatening illness or something. I suppose what he really needs is us praying for him.

I'd honestly wouldn't mind immobilizing him. A couple of broken knees and a broken left elbow to leave him with the capacity to make the Sign of the Cross would do him right. That way he could lay there and think and pray.

CONGREGATION FOR THE DOCTRINE OF THE FAITH

Second question: Whether the persons baptized with those formulas have to be baptized in forma absoluta?

To the first question: Negative.

To the second question: Affirmative.

The Supreme Pontiff Benedict XVI, at the Audience granted to the undersigned Cardinal Prefect of the Congregation for the Doctrine of the Faith, approved these Responses, adopted in the Ordinary Session of the Congregation, and ordered their publication.

Rome, from the Offices of the Congregation for the Doctrine of the Faith, February 1, 2008.

Archbishop Lefebvre did not disobey out Lord;

The Smoke of Satan entered the Church.

“In today’s crisis of Church and world, our strength is in God alone, because humanly speaking we are powerless in the face of the trials confronting us. Our enemies are all-powerful, those inside the Church being much more dangerous than those outside. Just as the chief priests and ancients hated Jesus unto death, but they needed an Apostle to betray him, so we may blame Jews and Freemasons and others like them for engineering the destruction of the Church, but it has taken churchmen from within to do the actual betraying and destroying. Does Our Lord hate these traitors, as we can be sorely tempted to do? No, he seeks only their salvation, although their punishment will be horrible if they do not repent”.

...I'd honestly wouldn't mind immobilizing him. A couple of broken knees and a broken left elbow to leave him with the capacity to make the Sign of the Cross would do him right. That way he could lay there and think and pray....

You need to go to confession and declare what you have said.

Long story short: Get little old ladies and children to pray for him.

I entrust this whole matter in the hands of the Immaculate Heart of Mary, “Mother of the Priest par excellence, Our Lord Jesus Christ, and through Him, of all priests in whom she forms her Son”.