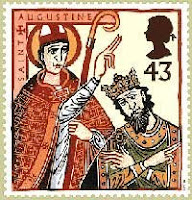 Reading the Martyrology this morning, I was intrigued to read that today is the feast of St Ethelbert. I knew who he was, of course; the (pagan) king of Kent that welcomed St Augustine of Canterbury, who had a wife called Bertha, the Christian daughter of Charibert, King of the Franks. He embraced Christianity, and this kicked off the conversion of the Saxons. I was surprised to discover that for this, he is venerated as a saint. It's reassuring, really, that it isn't only the Francis of Assisis of this world that go to heaven.
The rather romantic story of the time would seem to suggest that Britain was at the time a pagan wilderness to which St Augustine brought the light of the Gospel single-handedly. Well, of course, credit where credit is due. But credit is also due, perhaps even more so, to St Aidan and the Celtic monks of Lindisfarne and Iona, who had already been hard at work converting this island from the top down. And then moving on to the Low countries, Germany, and Switzerland. Their achievement was really spectacular. However, Rome was a little suspicious of the different way that the Celts went about things. Bishops were not very important in the Celtic general scheme of things; they were there to administer the sacraments and that was about that. A bishop may well have been a not particularly important monk in a monastery. The real power in the Church was wielded by abbots. And then there was all that fuss about the date of Easter, and whether a tonsure should be a bald patch on top with a ring of short hair left, or a shaved front of the head with the hair left to grow long down the back. Shades of mullets!
There is a lot of nonsense talked about the Celtic Church, though: I have heard Episcopalians in Scotland seriously assert that they were the natural heirs of the Celtic Church before the Roman usurpation; that the Celts were sorts of proto-Anglicans! As if St Columba every evening kissed his wife and children before going to the Cathedral for Evensong and Stanford in A. There is no question that the Celts were in communion with Rome—its just that the Irish have always liked doing things their own way, whereas Rome has always liked things tidy.
And the third bunch of Christians in the country were the old Romano-British hierarchy, whom everyone always forgets about. There had been English bishops at the Council of Arles, and Pelagius was said to have been British (though in fact he may have been Irish or Scottish), and there were still plenty of Christians and the whole operation, though on the whole pushed into the West country and what we now call Wales. This old hierarchy was in a bad mood, though: indigenous Christians had refused point-blank to engage in any evangelization among the Anglo-Saxons, which is understandable since the old A-Ss had been engaging in quite a lot of pillage, murder and rape over the last couple of hundred years.
So, happy feast of St Ethelbert! But let's not forget all the others.
Posted by Pastor in Monte at 10:54

Back in the 1960s the main parish in Slough, Bucks. was St. Ethelbert's. Driving through there in the 1990s I noticed the name had been changed to 'Our Lady and St. Ethelbert', I think.

I don't know why the name was changed. More recognizable, perhaps...?

"How the Irish Saved Civilization", by Thomas Cahill (published in 1996), is a delightful book, well written and a great read. It tells the story of how Irish monasteries became a sanctuary of learning and, more importantly, preserved the intellectual legacy of the west (manuscripts, traditions etc) during the dark ages following the collapse of the Roman Empire. Cahill's theory is that this Irish repository of learning and culture laid the foundations for the medieval Renaissance.

The word "bishop" is a loan word in English, from "episcope", overseer. However, the Old English "bi-scop" could be construed something like "assistant court poet". The same cutting down to size is possible in German too. I wonder if Huxley knew this when he styled the "successors" of Augustine in Brave New World as Archcommunitysongsters. Plus ca change...

Very interesting post father. Other than the book that Andrew recommended could you give me the name of another book on the topic? Here in Australia we have the nasty Roman Church vs good Irish Church spiel given to us by ex-nuns who are employed by the diocese to train catechists - God help us.