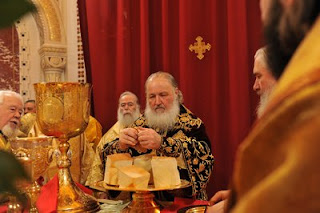 And here a splendid and rare view behind the iconostasis: I suppose it to be the fraction. All these pictures came from the Patriarchate site, and a biretta tip to Fr Tim the Continuous Hermeneut for alerting me.
Posted by Pastor in Monte at 10:10

If memory serves me right, (I used to go weekly, but it's been a few years) in the Byzantine rite the bread to be consecrated is cut into small cubes before the Liturgy proper begins - there is a long business at the offertory table, which has some name I can't remember either.

Looking at this photo, you can see one reason for doing things this way: imagine looking out for crumbs if that were the fraction!

I'm wondering how the camera-man managed to get in there?!

Can anyone tell me why the Orthodox clergy grow their hair long? Is it a matter of discipline or something else?

I was hearing from my friend the other day that before the Divine Liturgy, the portion of bread to be consecrated, called the Lamb, is cut from the centre of one loaf and placed on the diskos/paten. There are smaller loaves available for people to pass to the priest along with the names of those they wish to be prayed for. Prayers are offered quietly for them by the priest while a tiny portion is cut from the loaf, and these are all arranged around the Lamb, and, while they are not consecrated, they remain on the diskos throughout the Liturgy and the prayers that they represent are offered right there along with Christ's Sacrifice of Himself. I wasn't quite sure of what he was meaning; so, I ask, is that what we're seeing here?

I believe this is indeed the 'fraction'. The 'Lamb' used at the Liturgy on Sunday was huge. At the prosthesis the 'Lamb' would have been whole. I watched the service live on Russia Today. At the Great Entrance the discos (paten) had to be supported by two Archpriests as the Patriarch held it.

The ceremony had a plethora of TV cameras and photographers present.

The 'Lamb' is cut with a special Eucharistic lance at the beginning of the service. The sharp cuts are clearly visible in the photo.

The 'particles' to which Mark refers are used to commemorate Saints, the living and the dead. They are placed before the 'Lamb' but are not consecrated.

In the photo the 'Lamb' has been divided into four parts. From one of these (nearest the front of the Holy Table) the Patriarch will take Communion and give Communion, in the hand to the clergy in order of seniority. The clergy then receive the Chalice in due order. The remaining sections go into the Chalice. (At a large Liturgy such as this the contents of the Chalice will be divided into several smaller ones to facilitate ease of distribution). The laity (and the first to recieve at this Liturgy was Mrs. Medvedev) receive in the mouth from a spoon a portion of the Body soaked in the Blood.

At the end of the Communion rite the veiled Chalice is taken to the table of prothesis and the Deacons consume the remaining contents and carry out the necessary purifications.

As to 'crumbs' the discos is placed over the antimens - a corporal containg relics. Special brushes are used to sweep any crumbs up and they go into the Chalice to be consumed by the Deacons.

Reservation of the Sacrament takes place on Maundy Thursday only. Two Lambs are used and the one is basically divided into Particles that are soaked in the Blood. They are then removed, dried and stored in the Ark - basically a type of mini-tabernacle. However Communion is never given during the course of a Liturgy from this. The Sacrament is reserved for Communion of the Sick only.

The major reason for beards and long hair is because of the fear of blood whilst shaving. Byzantine-Orthodoxy has a strong Jewish sense of ritual purity in the altar (sanctuary).