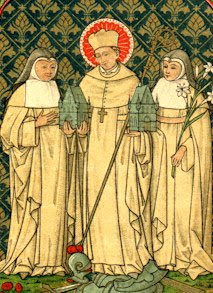 Today is the feast day of St Gilbert of Sempringham (c.1083-c.1190). Originally a secular priest of the diocese of Lincoln, he founded his own religious order (often erroneously described as the only religious order founded in England). It had two interesting characteristics: the first was that it was a double community of both women and men. What is less well known is that the two halves followed very different rules. The women were nuns, following the rule of St Benedict. The men were canons regular, following the rule of St Augustine. How that worked must have been, er, interesting. He was canonized a mere twelve years after his death at well over a hundred years old.
It is also the feast of Saint Rabanus Maurus (780-856), a prolific writer, perhaps best known today for his great hymn Veni Creator Spiritus (Come Holy Ghost, Creator).
Posted by Pastor in Monte at 07:30

Sorry to be rude, but that's actually a picture of our St Gilbert with his wife Petronilla, and his daughter Ponzia, all of whom became Norbertines.

Obviously of little interest to anyone else but we don't have many saints in the Order, so we are protective (and appreciative) of the ones we have!

Dear Fr Hugh—my apologies, but the mistake was honestly made. I found it labelled as St Gilbert of Sempringham elsewhere. And it's a nice picture in any event. It all fitted, as the Gilbert is clearly a canon and the ladies are clearly nuns.

"often erroneously described as the only religious order founded in England"

I have been known to describe him in this way - out of interest which other male relgious order(s) where founded in England?

Well, I didn't say 'male', Stephen, you did. There were several orders of female religious founded in the 19th and 20th centuries in England, and, for the men, you have the Mill Hill missionaries at least.

ah very good! I guess I did change the goal posts a little didn't I!