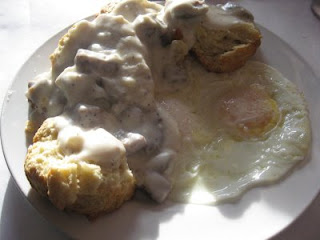 Well, I'm back. In Dallas, the temperature was 101 degrees, and on the plane, the captain said that it was 50 at Heathrow. But I'm not complaining; this morning I had my first pot of 'normal' tea, having slept for something like twelve hours, and am feeling a whole lot better.
I forgot to tell you about my last US breakfast. Charlie, a delightful academic from the University of Dallas, took me to Mecca, a diner, for a real Texan breakfast. Mostly it was great; he warned me the coffee was awful, so I chose diet Coke—he ordered the coffee. But I had to have the Texas speciality—biscuits and gravy with my scrambled egg. Oh my. The biscuits were fine; not biscuits as we understand them in the UK, but, basically, scones (perhaps a little softer in texture). But the gravy.… That, too, may be gravy, Jim, but not as we know it. What it adds up to is flour and water with a little bacon fat added. I'm not joking. Charlie added vast quantities of pepper to his serving in order to make it palatable. Nothing made it able for my palate; fortunately they had served the 'gravy' in a little bowl, so once I had braved a mouthful, I reached for the butter instead. So, if you go to Texas and they offer you biscuits with white gravy, do the sensible thing and run.
I've found a picture of biscuits and gravy, but Blogger doesn't seem to be accepting picture uploads right now. I'll try again later. Basically, the picture shows something that looks like someone has been sick over some scones and a fried egg. That just about sums it up. Actually, my gravy looked more like wallpaper paste with some tiny speckles in it.
Posted by Pastor in Monte at 10:46

Ha-ha!!!! They must have been out of grits! I lived in the south for 2.5 years in the mid 60s. Don't "Go there" with me. Fortunately, at that age I didn't know how to say "what the **** is this?!" Because I would have been in the principal's office eating a bar of soap. Probably Lava - but I never found out. As you say, the biscuits are fine...but sheesh....they use the "gravy" for mortar when they run out on building sites.

****other than that***** the food was generally really good, especially the BBQ pork/beef, and southern fried Chicken. And I don't mean the product put out by that fake artist, "the Colonel." True southern fried chicken is a real treat.

What was your FAVORITE dish down there?

(Actually, for a Catholic Mick from the Bronx, I make a mean biscuits-and-gravy having learned in the Army from a 'Bama boy.)

What Father, no 'Chicken-Fried Steak' for breakfast...? Also called 'Southern-Fried Steak' it too, is usually smothered in 'white gravy', though a 'brown' variety is also common. I usually specify: "Hold the gravy".

Not to be compared to the Bisto or Knorr variety you may be familiar with, the gravy is an 'acquired taste', which one may never succeed in acquiring, unless born south of the Mason-Dixon Line.

Years ago, friends returning from a vacation in Ireland would complain about the food - it was bland etc, and of course there was no McDonalds... My response usually was "You don't go to Ireland for the cuisine!"

I think that has changed now and Cordon Bleu cooking is available over there. But as for me, when I am there I just look for a 'Mixed Grill' on the menu and I am seldom disappointed...

I'm so glad I was not eating when I saw this picture! It is just as you described!

Your American meals obviously left a big impression on you and that one certainly 'takes the biscuit'! I'm surprised at the lack of vegetables you mentioned earlier - no wonder the Americans look so unhealthy. And we are told we are following them in our eating habits - I just hope that does not mean biscuits and gravy.

As a half Texan let me assure you that you must not have gotten good biscuits and gravy. Done right it is a little corner of heaven. Same for chicken fried steak.

Indeed, biscuits and gravy are truly delicious if done properly. Toss in a bit of sausage, too.

I think someone should send Father a Moon Pie and an RC Cola.

Digi...my dad used to work for RC cola -- work his way up from driving one of the trucks to plant manager...Somewhere there's a pic of dear old dad standing outside the truck with me in the driver's seat. Unfortunately, I wasn't chewing on a moon pie at the time. Them is some good eats.