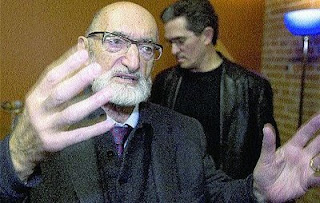 A large scandal has recently occurred in Canada. We are all aware, are we not, that Canada is one of the most 'liberal' societies in the West? Well, now the powers that be have decided to grant Canada's highest honour, the Order of Canada, to a man called Henry Morgentaler. The grant is made to those who have bestowed the very greatest benefits on their fellow Canadians. And Morgentaler's claim to this honour is that he, an Auschwitz survivor, has killed a prodigious quantity of Canada's unborn. This fanatic abortionist opened an illegal 'clinic' in 1969, and was prosecuted, spending ten months in prison for his activities until his conviction was overturned. Canada legalized abortion in 1988, and since then Morgentaler has happily wielded his knife, killing thousands of unborn Canadians. You can read a fuller account here, in the Vancouver Sun.
Understandably, there has been a great deal of revulsion among those who fight for the life of the unborn in Canada. Some other laureates of the OC have returned their decorations, not wanting to have their great achievements valued alongside those of an abortionist.
The new (and excellent) Archbishop of Toronto, Thomas Collins, today issued this forthright statement for his diocese:
Canada's highest honour has been debased. Henry Morgentaler has been awarded the Order of Canada. We are all diminished.
A community's worth is measured by the way it treats the most vulnerable, and no one is more vulnerable than in the first nine months of life's journey. No person may presume to judge the soul of Henry Morgentaler, but it cannot be denied that the effect of his life's work has been a deadly assault upon the most helpless among us.
Canada glories in the names of Banting and Best, and the other medical heroes who selflessly brought healing where there was disease and suffering. Now it honours with the Order of Canada a medical man who has brought not healing, but the destruction of the defenseless and immeasurable grief. The award must not stand.
I earnestly appeal to all who are tempted to resort to an abortionist, or pressured to do so by those around then. I urge you to contact organizations such as Birthright, and others who will support you and love you and your precious child. Contact your parish. We are here for you. I pledge to you the support of the Catholic Church. Look to our archdiocesan website at: www.archtoronto.org for information concerning places where you may find loving help.
For those who have had an abortion, and bear within your heart the fearful grief, I urge you to contact us, to find love and support in your anguish, and in the Sacrament of Reconciliation, to find the gift of inner peace.
I ask the faithful of the Archdiocese of Toronto, and all people of good will, to protest this act of dishonour. Write, phone, or e-mail the Governor General, the Prime Minister, and your Member of Parliament. Ask that this action be revoked.
This Sunday will be a day of special prayer in the Archdiocese of Toronto, for an end to the evil of abortion. I have asked that the following prayer be inserted in the Prayer of the Faithful in all the churches of the Archdiocese;
"That the scourge of abortion be lifted from our land, that those who promote it may be brought to a change of heart, that all who are tempted to abortion may be lovingly helped to protect the precious gift of life, and that all who have experienced an abortion may be comforted with the healing gift of love."
Posted by Pastor in Monte at 16:27

How very sad that this man should be 'honoured' in this way. what kind of message does this send out to people? I suppose we all know the answer.

Was Auschwitz not enough for this man? He now takes the lives of innocent children whose grandparents helped to free him. For Canada to give him an honor for doing so is really very sick.

Was Morgentaler ever at Auschwitz??? If not, did he lie to us about his medical education in Germany??? Did he become an abortionist in an effort to cover up his ignorance of medicine that was showing in his general "medical" practice???? Did he become abortion activist to save his life by staying in a spotlight just so MOSSAD would have a hard time to take him out as an imposter and a mockery of all real victims of Holocaust??

The only way Morgentaler could get away with his lie would be if Germans were to recycle their numbers. According to this link: http://www.ushmm.org/wlc/article.php?lang=en&ModuleId=10007056
it never happen with Jewish prisoners, and yes numbers were assigned not only in sequential but also in alphabetical order (going by last name of prisoner) in each transport that arrived.

Morgentaler was in fact at Auschwitz concentration camp during WWII.
Abramek Morgentaler from Woclawek, that is, who is now living in Israel.

Translation: Abramek Morgentaler just turned 81, he is doing well, I was concerned over his health lately. Nursed by his wonderful wife Eli and whole family, he quickly recovered. When bombs fell on Hajfa his heart and his lungs failed. I prayed to God , and God heard my prayers.

Abramek as thirteen years old boy lost his whole family. Germans gassed his parents and three sisters in Chelm concentration camp. He was send to labour camps and Auschwitz concentration camp, by a miracle he survived.

Henry Morgentaler claims that his prisoner number was 95077

First name on that list is Jewish and starts with "Ab" and has number 95043 assigned to it. We can safely assume that he was first on a list of prisoners that came on this particular transport.

Morgentaler starts with "Mo" and he claims that his prisoner number was 95077. It does make sense as M falls between A and P in German alphabet.

"It's much easier not to think about it, not to acknowledge what people did to other people not so long ago," said Abraham Mor-Morgentaler, a Polish Jew who spent two years in Auschwitz. "But if we forget, the genocide may return."

Mor-Morgentaler is one of the few who, by chance or cunning, cheated death at Auschwitz. Most Jews arriving there by cattle trains were sent straight to gas chambers and their bodies burned in one of the camp's five crematoriums.


http://www.cbc.ca/news/background/abortion/morgentaler.html
A Polish Jew who survived the Auschwitz death camp (where he was tattooed with number 95077), Morgentaler has pointed many times to what he saw as one of the root causes of Hitler’s death machine – unwanted children who were fighting back against a family that abused them.


http://www.theglobeandmail.com/series/morgentaler/
In 1944, Henry, his brother and their mother were rounded up and shipped to Auschwitz. His number isn't tattooed on his arm because, by then, the Nazis were too rushed. “But I remember my number: 95077.”

http://www.princegeorgecitizen.com/20080617137021/wire/world-news/henryk-mandelbaum-auschwitz-survivor-forced-to-strip-fellow-jews-dies-at-85.html Henryk Mandelbaum
He was forced to do the work from his arrival in Auschwitz, at age 21, on April 10, 1944, until January 1945, when the Nazis forced him and other fit inmates on a death march to flee the advancing Red Army. The Soviets liberated the camp on Jan. 27, 1945, finding the weak and sick left behind.
During his months in the camp, Mandelbaum - inmate number 181970 - witnessed the death of some of the 400,000 Jews brought in transports from Hungary in the summer of 1944, and handled their dead bodies.

"His brother's ashes have been scattered at Auschwitz joining those of their mother, who was on the same death train as her sons but never came out."

http://www.cbc.ca/canada/story/2008/07/02/f-vp-mallick.html
I remember what Morgentaler has told me about Lodz, about how he had a repeated dream of being surrounded by Nazi guards in uniform. In 1944, he was taken to Auschwitz by train, his mother was sent off for immediate gassing, and he scarcely survived his time there, literally dodging bullets in the last days of the Second World War.

http://www.jewishtoronto.net/page.aspx?id=106451
Two men fell in love with Rosenfarb during those difficult years: the young Henry Morgentaler, who dreamed of becoming a doctor, and Bono Wiener, five years older than her, who was a leader of the illegal resistance against the Germans in the ghetto. In April 1945, she and Morgantaler were liberated from Bergen Belsen and smuggled themselves into Belgium where they were not allowed to work.

http://www.cbc.ca/news/background/abortion/morgentaler.html
After his liberation from Auschwitz, Morgentaler won a scholarship and used it to study medicine in Germany. The new doctor and his wife emigrated to Canada in 1950 and settled in Montreal, where he practised family medicine, embraced humanism and enjoyed life.

Maybe we have the beginnings of a conspiracy theory here.

http://www.theglobeandmail.com/series/morgentaler/
Born in Lodz, Poland, on March 19, 1923, Dr. Morgentaler was …
He's obviously enjoying himself immensely as he tucks into a dinner of caviar, borscht and blinis at a Montreal Russian restaurant, Troika, that was a favourite of his late brother, Mike. … This is the place where he and Mike, who died in 1996, …
“When I was 4¼, my brother was born,”

From this we know Morgentaler was born in 1923, his brother Mike was born 4 years later, that is 1927, and his brother died in 1996. They were both born in Lodz Poland.

http://clcbc.org/morg/ts85.htm
Morgentaler does not own the Harbord St. building. It's owned by Gestions Habal Inc., of Montreal, which is his brother Abram's firm. Abram (Mike) Morgentaler told The Star ...

His brother’s original name is Abram.

But Yad Vashem, the world’s greatest source of holocaust information, says that Abram died in the Holocaust.

http://tinyurl.com/6d538f
Abram Morgentaler was born in 1927. Prior to WWII he lived in Lodz, Poland. During the war he was in Lodz, Ghetto. Abram perished in the Shoah. This information is based on a List of Lodz ghetto inmates found in the Lodz Names - List of the ghetto inhabitants 1940-1944, Yad Vashem and the Organization of former residents of Lodz in Israel, Jerusalem 1994.

If Henry’s original name was Henoch, he also died.

http://tinyurl.com/654msh
Henoch Morgentaler was born in 1923. Prior to WWII he lived in Lodz, Poland. During the war he was in Lodz, Ghetto. Henoch perished in the Shoah. This information is based on a List of Lodz ghetto inmates found in the Lodz Names - List of the ghetto inhabitants 1940-1944, Yad Vashem and the Organization of former residents of Lodz in Israel, Jerusalem 1994.


Did Mike and Henry take over the identities of the true Morgentalers?

It seems that I found when Henry was allegedly arrested in Lodz Ghetto; August 23, 1994.

Holocaust Literature: An Encyclopedia of Writers and Their Work

Page 1030. Bottom of left column and top of right column.