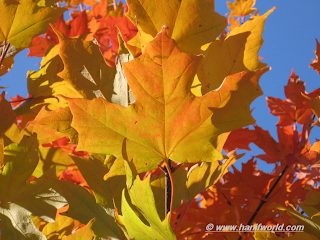 Canada has produced lots of surprises in addition to the birdies and beasties I mentioned a few posts ago. One of the most surprising things has been serving milk out of a plastic bag. No, I'm not joking: a normal, floppy, plastic bag full of milk is put in a jug, and the corner of the plastic cut off. Hey presto; a jug of milk. Light switches are odd: down is off and up is on. There are trams here, except they call them street cars, and they aren't those new swish ones that ply around the Croydon area in South London, but the real old-fashioned bangy and clanky ones (though I've seen one or two more up to date models too). People take their lives in their hands to board or descend, having to walk right out into the traffic to do so. Roads don't seem to be in particularly good shape, being concrete and hole for the most part—this might be something to do with the severe (by UK standards) winter weather.
Sounds: the ubiquitous whirr, rumble or roar of air conditioning, the clank of trams, the strange polytonal mournful sound of a railway whistle, just like in the Westerns.
Smells: fried food from a thousand different cuisines, moving from one to another along the street. Arome de Tramp—there seem to be an inordinate number of beggars.
Sights: apart from those already described, what has struck me is the sheer number of people just sitting around on porches, on the side of the road, on steps… Are they all unemployed, or on benefits, or on drugs, or simply enjoying the fresh air? I don't know. Lots of them aren't begging, or even looking depressed or downtrodden. They are just sitting there, mostly looking perfectly content. And most of them are friendly. When I went out walking yesterday towards the city centre, this cheerful man sitting on the ground held out a bag of some sort of cooked food (chips?) and invited me to tuck in. 'No thanks' I said, smiling. 'Go on, man' he said 'the smell is jes' delicious'. Just walking around near the Oratory, I have been struck by how many times I have been greeted by complete strangers 'hi, Father'. It speaks volumes for the work the fathers here at the Oratory have done in the locality over the last years. It is very easy to strike up conversations with people. Massive trucks (not lorries) with big gabled engines. So large that, apparently, they often fall over going around corners, or going on to motorway slip roads. Black squirrels. Where are all the famous North American greys? I ask. The answer? Over in the UK eating all the native red squirrels! Vietnamese people, Chinese people, Tibetan people (I found a Tibetan restaurant—closed—yesterday: I'd love to try it, but don't suppose I'll get a chance). Bilingual signs everywhere: French is a much bigger reality than I expected.
Tastes: ketchup, coke, ketchup, peanut butter, ketchup, mayonnaise, ketchup. The Serbian cook here at the Oratory is actually very good.
But most refreshing of all is the attitude to things. Today we had a visit from the youth ministry team for the Diocese of Toronto. It was a sort of day of recollection, and there was a chance for confession, rosary, talks on the spiritual life, and—take a deep breath—an extraordinary use Mass. I was asked to give them a talk to prepare them for the Old Rite Mass. Only one had ever attended one before, and they listened most attentively, and seemed very open to the whole idea. I want to reflect on all this, and may well have more to write later on. That'll do for now.
Posted by Pastor in Monte at 18:44

Father, -if you come across Rev. Michael Eades at the Toronto Oratory, please pass on congratulations on his diaconal ordination from people who remember him from a visit he made a few years ago to our parish in rural Staffordshire.

I bet a lot of them would have said "Hello" even if you didn't have your collar on. :-D

Have I forgotten how light swtiches are over there? Here you turn UP the lights when you come into a room, and turn DOWN the light when you split. Unless, of course, your parents "own the Pennsylvania Power and Light Company." [Mine didn't -- as they informed me every time I left a light on.]

Your detailed observations are giving us an insight into life in Canada. Most intriguing differences especially milk in a bag! And French signs in Toronto. I expect you have heard of the faux pas by Paris-Match regarding their mixup with Quebec state and Quebec city recently! More ignorance about Canada! Regarding the people all sitting around - are they on their own or in groups?

I look forward to more comments about a country of which I know nothing except that it is vast and has very cold winters!

Ah, given the humidity, I'd say they were out on the porch trying to get some AIR. Electric bills are high enough in the winter up there...and it's just sociable to sit on the front porch.

"Back in the day" it used to be more common (before TV anyway) to sit out on the front porch and chat and read the paper and greet passers by.

The way newer houses are constructed nowadays, there are few if any porches. A loss I think.

I'm a little late in posting this Father and I presume you are now back in England but as a resident of Toronto I have to point out that Toronto is a city of two and a half million people made up of "all sorts and conditions". There are any number of different neighbourhoods, each with their own characteristics. The Oratory is in South Parkdale which is a fairly poor area with many rooming houses and social problems. There are indeed a lot of beggers there and the women walking the streets are very often truly "walking the streets".

There is also much to love about Parkdale. There are friendlier people there than, say, the Financial district and I remember when I worked down there that it was not unusual to hear the sounds of sandals and beads and encounter Capuchian friars alking down the streets.

As for French you will see it on every package in the store. The law says it must be there but you will rarely hear it spoken, especikally in Parkdale where you will hear countless other languages.

And milk in plastic bags? I hate and abhor tehm but they are cheaper than the cartons and I'm sure that in the Oratory they are a must.