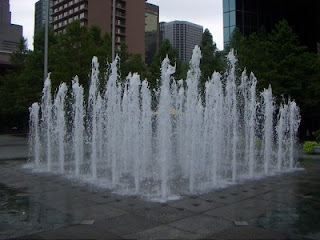 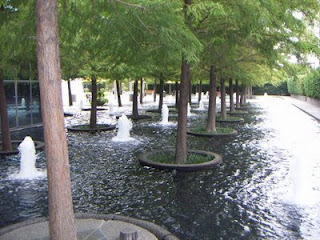 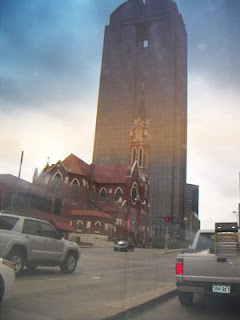 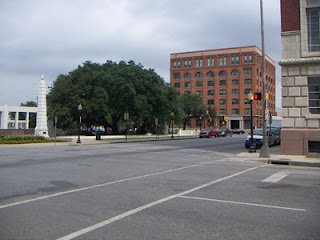 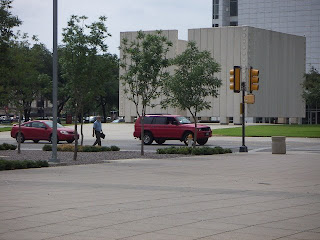 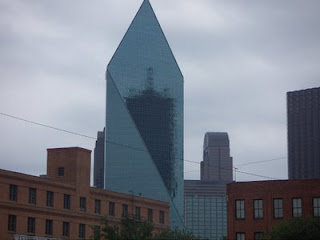 Dallas itself has many impressive buildings, almost all corporate. Dr Wegemer dropped me off by the side of the road and let me wander through an area somewhat redolent of Tivoli—well, it had a lot of water, which cooled down the oppressive heat (and, I’m told, this is COLD for Texas in July). We also passed (and I include a poor photograph) of the only thing in Texas that is not bigger and better—the Catholic Cathedral, nestling in the midst of tower blocks. Dallas’ main attraction, though, is unquestionably the event that took place on 22nd November 1963; the other event, I mean. On the same day and hour that CS Lewis died in England, John F Kennedy was shot in Dealey Plaza in Dallas. Kennedy was a controversial figure—the first, and, to date, the only Catholic president of the US—and I suppose it was the combination of the Cuban Missile Crisis and the manner of his death that has so secured him a place in history. I still don’t know quite why he was shot, but the death itself made a huge impact. I remember a very common picture from my youth called ‘The Peace Sowers’, showing Kennedy walking a ploughed field with Pope John XXIII, both casting seed to left and right. Well, we know a bit more about the Kennedy family now, but yet the memory of this man has not yet departed. It isn’t going to in Dallas, anyway. Quite apart from the site in Dealey Plaza, there is the Book Repostiory from where Oswald is supposed to have fired the shots (maybe), now a museum where you can even look through a sort of gun sight through his window, and the JFK memorial. This, alleged to be a commoration of the free spirit of JFK, is, basically, a large empty marble box, full of hot air (which Dallas is very full of). If it is intended as a compliment to JFK, it looks like a backhanded one. And it isn’t very popular in Dallas; many want it demolished, and many can think of better monuments to someone. Endowing a college, for instance, which could certainly be done with the money gained from the sale of this very central site in downtown Dallas.
I mentioned in an earlier post the fact that price of petrol here in the US is less than half what it is in the UK, but that people still complain loudly. Well, one effect of this is that people have started to move back into city centres, since substantial commutes are no longer so attractive as once they were. I was told that five years ago the population of downtown Dallas was about 500; now it is 5000 and continues to grow apace. Once again, the American people are beginning to regenerate city centres, and this will have an impact on the very car-centred economy they have. Perhaps they will start walking again.
Walking in Dallas is not a very pleasant experience at this time of year; at least for any time or distance. So they have contructed a net of warrens under the earth—air conditioned tunnels leading here and there. Toronto and other Canadian cities have done the same thing, but for the opposite reason—snow.
In one photo here you can see the famous crystal high-rise, with the oil-rig imitation reflected in its surface. Cool, eh?
Posted by Pastor in Monte at 17:51

I am filled with holy envy!!

It's an interesting post. I was wondering whether you would get a chance to go to Dealy plaza and I'm glad you did. Oh, I'm sure there are "Better uses" for the Texas School Book Depository. But I think all same it would be a loss if it were torn down to be replaced by a Walmart or the like.

I can remember few events in my lifetime where there was a such a frisson between the day after and the day before. Anyone who was alive then and remembers will know what I mean. I was 7, but I remember many details of that day and the aftermath. Literally two days ago I had come across a small scrapbook of picture cuttings from the newspaper I had made on that awful weekend. Funny how a child will order things. But I believe I'd caught the essence.

You should see Houston. The pedestrian life is so brutal in the 110 degree heat (with 99% humidity) that the whole downtown is dotted with second floor, in-door, A/C'd, skywalks.