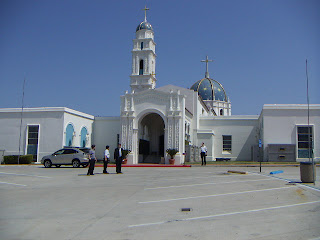 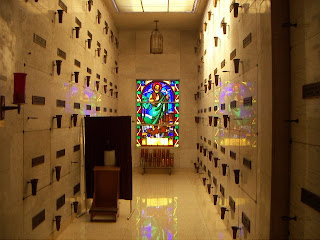 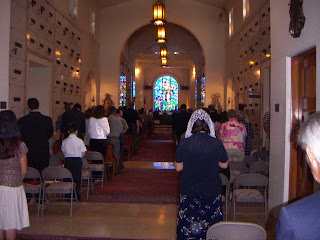 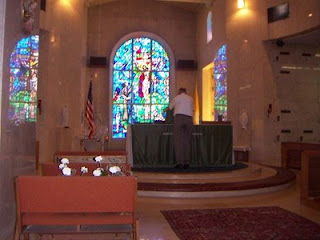 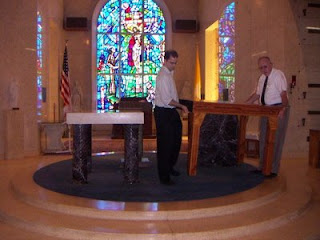 On Sunday, the Little Oratory decided to go into full Oratory mode. So we celebrated the Oratory for Sunday morning before Mass, and, while I heard confessions, the brothers celebrated the office of Terce. Mass followed. All this took place in a rather extraordinary location. As you can see from the first picture, the exterior is somewhat spectacular. It is actually Holy Cross, a Catholic cemetery chapel, and, once through the doors, the interior is bizarre and a little creepy. There are all sorts of options for burial there; inhumation in the substantial grounds is one choice on offer, but there are also catacomb-like loculi options also. The chapel is at the heart of a huge complex of marble corridors lined with the bodies of the dead. Each body is sealed in a stainless steel casket and slotted into a hole in the wall, which is then sealed with a marble slab. There are thousands of these things in that weird building. In the second picture, you can see where I heard confessions, down another corridor of coffins. During confessions, a man came to pray at the grave of his family, and confessions had to be halted while he performed his devotions. This is the location allotted by Bishop Robert Brom of San Diego to the Latin Mass community in the town. I gather cemetery chapels are preferred locations for not-very-enthusiastic bishops permitting the TLM in the States. I was told that one summer there was a horrible smell in the building. Let’s not enquire further………
Shortly before the TLM arrived at the chapel, it was wreckovated. A perfectly good altar was replaced by a cube and a ‘balancing’ lectern, which would have made the chapel unusable for the TLM had not the architect placed the lectern weirdly behind the altar and to the side, which enabled the same workmen who made the alterations, out of the kindness of their hearts, to make another cube table in wood which can be lifted beside the altar cube to make (with a Greek corporal containing relics) a long enough altar for the TLM, which is often celebrated for them by priests from the Premonstratentian community in Orange County. After Mass, it is all disassembled at considerable labour, as you can see, to return the chapel to Ordinary form use during the week.
I said Mass here against a constant background hum from the immediately adjacent freeway and aggressively noisy fans and air conditioning.
The TLM community in San Diego are praying that the bishop might perhaps be able to allot them another church, more convenient and less creepy, for the Sunday Mass, which now attracts some 450 people. They have the use of another little Church in a Hispanic district for weekday Masses.
While hearing confessions, I was most interested to discover that many of the penitents had been lapsed, but had returned to the faith precisely because they had found the TLM.
Posted by Pastor in Monte at 00:41

You don't have mausoleums in the UK? I am surprised by that. They are very common here.

A local cemetery outside of Chicago (Queen of Heaven) has a very large mausoleum that has some 30,000 crypts. It's actually a really beautiful building. I never really thought of it as creepy because it is so pretty.

I'm with you that cemetery always gave me the creeps. And it's not located in a hot part of town. When my mother died I had her buried on the grounds of San Luis Rey Mission in Oceanside. BTw, it was the previous bishop, Maher, who decided a cemetery would be a fitting place for TLM. I wasn't a fan of his either, nor his successor.