Well, I’ve arrived in Canada now—the journey was long but pretty simple. Again there was a striking contrast between Heathrow Airport and Toronto; Heathrow low-ceilinged and stuffy, Toronto vast and airy. I was smuggled off to the countryside for a couple of days, and was amazed at the different varieties of wildlife to be seen. The standard bird in the UK would seem to be brown— a friend of mine, asked a variety of bird, would simply describe it as an LBB —a little brown bird. Here the birds are multi-coloured and vibrant, with strange musical calls. There is a bird like a blackbird but with brilliant red stripes on its wings. There are jays, but which have bright blue patterns on their wings. 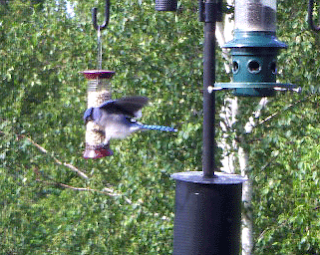 and birds that look like rooks until you see that their head is actually a sort of shiny electric blue. There are peculiar woodpeckers, and little humming birds that despise any sort of food unless it is red. The wildflowers, too, are strikingly different both in colour and species — Fr Robinson, the Provost of the Oratory, was trying to have a serious conversation with me as we took a walk up and down a lane, and all the time my eyes were being caught by something new and striking. He was very understanding, and actually seemed to enjoy my excitement.

But, in the end, the creatures that stole the show were the chipmunks. They are much smaller than I had imagined (having a vague memory of cartoon characters when I was a boy) and very much tamer. They come right up to one if there is food on offer, and even permit themselves to be stroked. The cup in these pictures was full of peanuts; they stuff the nuts into their capacious cheeks, and then scamper off at high speed, presumably to hide them. The number of nuts these set of chipmunks (or possibly chipnuns) managed to cheek off us was prodigious; I imagine that deep in the woods somewhere nearby there are several tons of nuts which one day will avalanche on some unsuspecting passer-by. 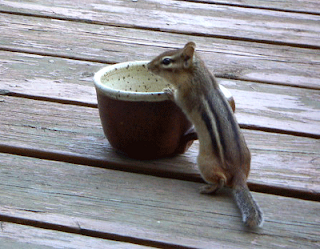 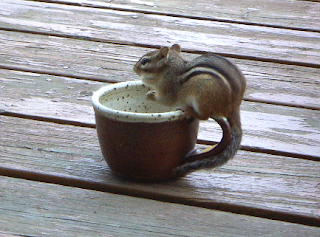 This little feller, (or fella), scampered up my leg to get at the peanuts. 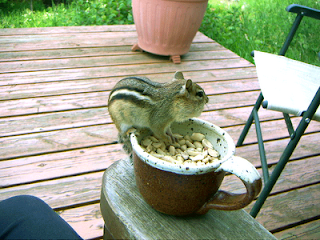 And now I'm in the muggy heat of Toronto city (fortunately the Oratory guest room has air conditioning). I took a walk around, and have seen all the North American clichés: street hydrants, a greyhound bus, yellow school buses, a U-Haul trailer and lots more.
North American readers will have to excuse this tourist's naïvité.
Posted by Pastor in Monte at 20:22

Hey, is this your very first time to North American?! I didn't realize you folks didn't have fire hydrants! But then I wasn't especially looking for them when I was there.

Just hope you don't run across that other North American native...the skunk. actually quite tame and placid...unless, of course, you frighten them. Brother! I can remember rolling up home in the driveway one night two summers ago, and opening the car door...and I was just about to step out of the car with my foot poised and something made me look down.... a black fur ball with a white stripe (yikes!) was ambling not 6 inches beneath my foot. ...so a carefully retracted said foot...and carefully pulled the door closer to me (but NOT shut so as not to startle the thing...and proceeded to wait a good five minutes before I ventured out. If you're good ask someone to take you snipe hunting at night. Not to be missed.

At any rate...here are two more chipmunks.

Interesting to see your pictures of the chipmunks. They are certainly much tinier than I imagined too. I had always thought of them as being the size of a large cat and I'm sure that in the cartoons my sons used to watch they were pictured in this way. When my sons were small there seemed to be many American cartoons on TV and i did wonder whether they would grow up with American accents!

Fr Zuhldorf has shown some beautiful pictures of the birds he sees in his garden, on his webblog and I too was astonished at their colours - only seen in pet shops and zoos here in britain! I knew budgies were wild in Australia but until I saw Fr Z's photos had no idea that similar wild life existed in America. What a difference to our sparrows and pigeons!