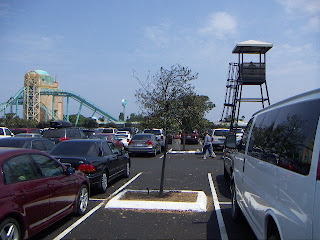 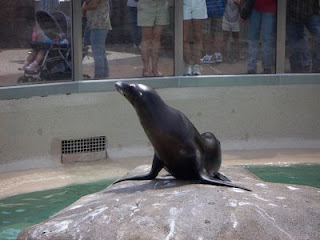 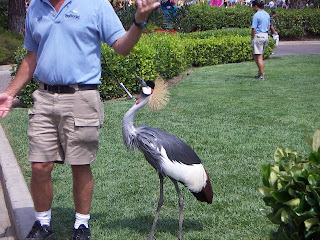 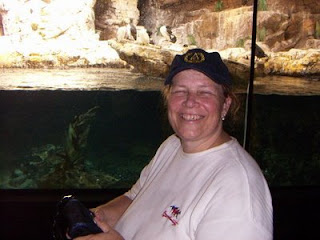 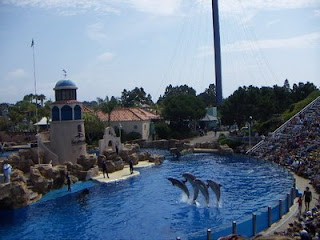 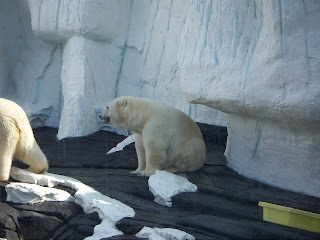 Hilarious account of your Seworld, sorry, Seaworld adventure! So envious you met with Karen :-)

HEck, I was ticked to find out we'd missed some free beer samples! Shoulda read the fine print on the map! Your dolphin pic. came out really good. You caught them mid air nicely.

I meant to mention the little girl at the dolphin show, Tessa, so brave she would have jumped right in that water had the trainer not grabbed her! That kid was fearless.

Actually, there was only ONE place in ONE theme park where a particular meal was worth writing home about.

Disneyland USED to have a place that served BBQ'd beef ribs that were primo outstanding and drop dead mouth watering.

So what did they do? Closed it down. So I wasn't particularly mortified or tough...just...not holding any high expectations!

I think Digihairshirt up in Anaheim would agree. Steph? Steph, are you reading this one?

Karen, dear, I am not only reading it but I thought it was absolutely splendid! I have never really taken to Sea World and have been forced to go only because of the incessant pleadings of the DigiDaughter, whom I adore. That, and it was her birthday.

Father, I will assume your timing was working against you, but shame upon Karen for simply not taking you to Old Town for lunch, where at least you could have found decent Mexican food and an alcoholic beverage to wash it down. One of the greatest innovations at Disneyland is its neighbor, Disney's California Adventure, where wine, beer and margaritas can be obtained.

Theme park food is notoriously bad and expensive. However, at Disneyland, the best place to eat is in New Orleans Square, but if you should take a meal at the expensive-and-not-worth-it Blue Bayou restaurant, bring a Coleman lamp to read the menu. I would rather go to Orleans or French Market. Grandma's Buffet at Dollywood in Pigeon Forge, Tennessee, is exquisite.

Father, we haven't been formally introduced, but next time you're in Southern California and the Gem of the Ocean suggests a day trip with her, for God's sake, man, call for backup and I'll come running!

Karen, dearest, I still have that 200-lb. block of frozen moose, but less a few ounces as the DigiSpouse has been chipping away at it for his smoker . . .

Digi, I think Peter's too chicken to take us up on the Moose, we may as well serve it to little Mexican kids who would be happy to have that meal! Or we could just tell the American kids it is buffalo. I know. Time Against for Old Town, but believe me it crossed my mind. If he had had time Friday after the Harbor tour I would have show him "that thing in our sacristy!!!!" I was hoping he'd exorcise demons from it. [Don't you remember the Beef Ribs in Disneyland? they really WERE worth eating and reasonably priced. 9 bucks for a hearty serving.

Karen, no! The Abomination in the Sacristry must remain where it is, lest a person's eyes are caused to bleed. It speaks, "I am Legion!" and gazing upon it could result in madness. Better, far better, to let a naive Englishman return home safely without exposure to such evil.

I hope the sainted Fr. S, continues to throw the occasional Holy Water upon it, lest it escape from the armoire . . .