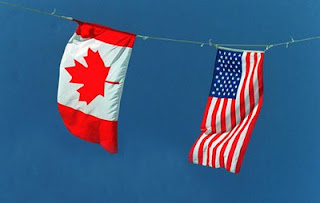 I forgot to mention the process of immigration from the US to Canada. Contrary to information received, this took place actually in Canada. Again, contrary to information, the officials were courteous and efficient. A Spanish friend of mine, travelling to the US had been asked where her visa was. ‘I don’t have a visa’ she said. The temperature dropped several degrees. She hastened to clarify ‘I don’t need one’. The chilly reply came ‘All Latin Americans need visas’.
‘But I’m from Spain’.
‘I repeat: all Latinos need visas!’
It took considerable powers of persuasion to convince the official that Spain is, indeed, in Europe.

But it all went like clockwork for me (except that I had to return and fill in a green card). What was slightly disappointing was that I was not asked at any stage whether I intended to overthrow the government, shoot the President or stick gum under the seats of public transport.
I had quite a wait at the airport, but I passed the time by reading a book and ordering a coffee from a woman called Candida. She proudly wore a badge that proclaimed 'We have had Candida here since 2002'.
Posted by Pastor in Monte at 23:16