Cattle and other matters 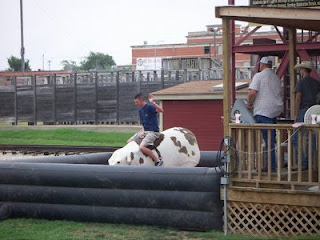 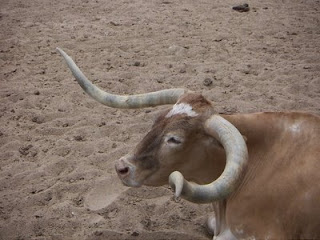 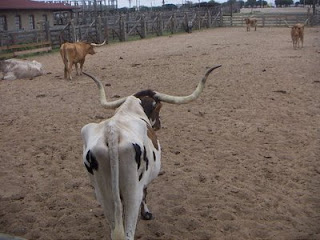 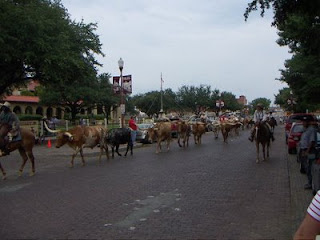 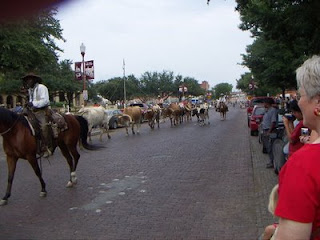 Lunch was the great local cuisine; Tex-Mex, though I found myself unable for it, really, after the breakfast. And then we went to Fort Worth, considered to be the more classy end of things. There we visited a Texan cliché; the stock yards.
Everyone knows that Texas is all about cattle, in particular the beast known as the longhorn (for obvious reasons). The stockyards in Fort Worth were absolutely huge, and still functioning fully until the mid 1980s when modern technology rendered them largely obsolete. Nowadays, the good ol’boys sit in specially air-conditioned bars drinkin whisky and rye thinkin ‘this’ll be the day that I buy’ and watching the stock on television screens.
For sentimental and historical reasons, they still keep a handful of longhorns at Fort Worth stockyards, and do a bit of rodeo ridin; you can even try your skill on a mechanical bull. There are a few men dressed up as cowboys who herd the herd up and down the street a couple of times a day for the tourists; I thought it all a bit lame and pointless, until I realised that for the people of Texas, it is a bit like changing the guard; pointless in one sense, but in another, an assertion of one’s history that is, in point of fact, very important indeed.
We visited some of the cattle—all bulls, as it turned out—in a pen, and watched as the long and very heavy horns posed something of an obstacle to a bull wanting to drink. The horns proved a little more useful as another bull succeeded in scratching, er, a certain part of himself that any shorter-horned animal could never have dreamed of managing.
The afternoon brought a reunion of some of my former colleagues and students from the Thomas More in England program(me), (which is the reason for my connection with the University of Dallas) all of whom it was wonderful to see again. There was more food, which I entirely avoided, and began to tremble in anticipation of the promised dinner. When the do was over, I cried off the dinner: I couldn’t face another mouthful, and pinched one or two of the nibbles from the reception which stood me in good stead yesterday evening and this morning.
Posted by Pastor in Monte at 00:06

That must have been some breakfast to wave off lunch and dinner! What did you have? A side of beef and eggs?!