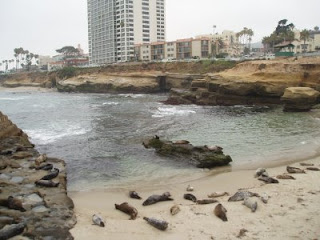 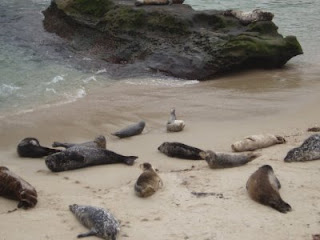 This morning, after Mass, we made a little trip to La Hoya (pronounced La Jolla). I have to be honest and say that I can’t see what all the fuss is about. It’s a nice enough little town, and obviously full of pretty rich people, but really I preferred San Diego. But La Joya (pronounced La Holla) did show me some interesting wild life. The first thing we saw was a pair of pelicans flying overhead (neither in their piety—positively impious, in fact), though flying too fast for the camera. Apparently they nearly became extinct due to the ubiquity of DDT, which had the effect of softening their eggs, which collapsed when the birds sat on them. But now their numbers are recovering, and their eggs hard-boiled again.
I don’t know whether this is normal, but La Yojja (pronounced Ha Lawyer) stinks pretty badly today. In fact it reminds me of seaside holidays when I was younger; the smell is badly rotting seaweed. I actually live in a seaside town, as you no doubt know, and I never get this pungent and quite unpleasant aroma that I remember from the past. There is a refreshing seaside smell of some sorts of seaweed, and that I get in Shoreham, but this one—perhaps it’s rotting kelp, because Ja Loyya (pronounced y’all holler) has substantial kelp beds off the beach.
The next sight was a school?, pod? —bunch of seals who have moved in to take posession of the Children’s beach, and lie there like obese diners after a seventeen-course luncheon with different wines for every course, occasionally groaning and rolling over to belch extravagantly*. The locals are quite divided between those who think that they are cute, and those who want to go out and club them to death and make some fur coats (though really that’s the last thing you need here) because (a) the kids can’t play on their own beach — there are notices everywhere warning that it is a Federal Offense Carrying the Maximum Penalty of the Death Sentence, A Fine of Sixteen Trillion Dollars plus the Confiscation of your Grandmother’s Pension Book to even look at the seals because, apparently, it stresses them. Some parishioners stress me, but nobody is proposing lethally injecting them — and (b) they** poo on the beach.
The next bit of local fauna—and really you see these everywhere—is the brown-legged, silicone-breasted blonde jogging bird, and the Greatly Spotted Tan Surfer Dude.
* John, my host, thought that they looked more like Dominicans performing the venia.
** The seals, that is, for Peter Wright and other people confused by my pronouns, not the children or my parishioners.

Posting, by the way, is going to be intermittent over the next few days —I have to do this in the descendent of a Western Saloon, known here as Starbucks, where I can get a wireless signal as I get off my hoss and sip my skinny mocha latte or whatever.
Posted by Pastor in Monte at 22:12

I am greatly enjoying reading about your holiday, Father - I feel as if I have been to these places myself now!

ROTFLMAO! The funniest post I've ever seen about La Jolla. Thank the "Bunny huggers" for the seal beach disaster piece. For a swimming beach up there go to La Jolla Shores, a little south of the scripps institute of oceanography. Better yet, Coronado by the Hotel del. [of "some like it hot" fame]

Many thanks, Father, for the post from the Last Chance Saloon, or wherever. What exotic places you visit.

You wrote : "they poo on the beach." Pronouns confuse me. I wasn't sure if "they" refers to the local children, the seals, or your parishioners. So, I'll give all beaches a wide berth in future.

Have a jolly nice time.