University of Dallas and the Cistercian Abbey 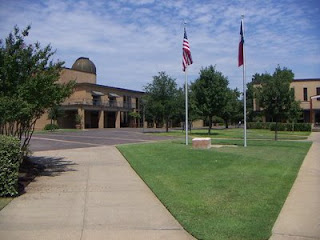 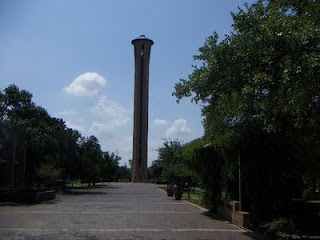 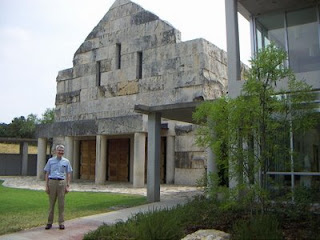 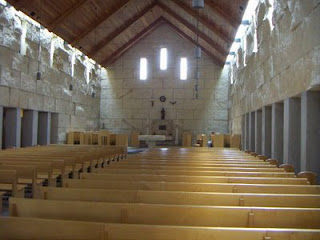 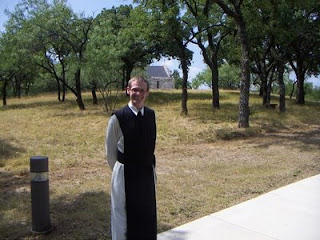 The University of Dallas was founded in the mid-1950s by, essentially, the Sisters of St Mary of Namur (who might be the same team as our Notre dame de Namur Sisters). They thought that the area around what they horribly call the Metroplex (meaning all the built up area around Dallas and Fort Worth) needed a new mixed college. The diocese agreed with them, and soon the project turned into the University of Dallas.
UD is a Catholic University, with a strong emphasis on the Liberal Arts; all students, even in the Graduate Program(me) have to follow a core curriculum of subjects including several I am no good at, so I suppose I’d never have been able to come here. The campus is very pleasant indeed; modern buildings, but set in gently landscaped parkland among mesquite and oak trees stunted by drought and heat, and both buildings and land are well-maintained. There is a central area known as the Mall, dominated by a vast tower, not unlike an airport control tower. This is hung with three or four bells which chime the quarter hours and ring for Mass and Angelus very loudly and splendidly.
The UD promotional video was made by Tommy Heyne, and actually finished in my attic in Shoreham. It has proved very successful in boosting the number of applicants to UD.

The University got a great boost in the 1960s by the arrival next door of refugee Cistercian monks from Hungary (O.Cist not Trappists). These were highly educated men who opened a high school for boys and also many of whom taught at the University. Some had been imprisoned or even tortured: one had been in prison with Mindszenty under the Nazis as a suspected Communist sympathizer, and then again under the communists as a suspected Nazi sympathizer. Most got out of Hungary under the rising, others managed to study in Rome, and were told by the imprisoned Abbot not to return to Hungary, but to seek out the other exiles in America. So the Abbey was born. The Hungarian monks struggled on for many years, with few local vocations. Finally even these dried up. Then, all of a sudden, within the last five or so years, they have had more applicants than they could take, mostly from the school and the University (which is a very good sign), and things look rosy indeed.
I had a tour this morning of the Abbey church, school and monastery from a young monk who had been on the Thomas More Summer School in 2000: in those days he was not even a Catholic, so he has come a long way. The abbey church is a rather severe building in rough limestone and concrete, said to be a representation of some Romanesque building in Hungary. The likeness must be only tangential—in the proportions, maybe—but it does have a rather brutal grandeur.
That's Professor Gerard Wegemer standing in front of the Abbey Church, and the monk is Brother Stephen.

Here's the UD promotional video, which was finished in my attic:

What an interesting post and video. I never knew much about this school beyond its name. Great concept of taking most of the students over there for a semester in their sophomore year. I don't think I've heard of any other college that does that in quite that way. Quite frequently colleges have exchange programs for their students...but I've never seen it on such a massive scale. I took a look at their core curriculum and the time abroad must really bring what they are studying then to life in a way they could not get from the text books.

Please Father - Texas had lots going for it before oil. It had Texans.

I'm half Texan meaning I moved there (Houston)at about 16 and lived there for 16 years. I gradually morphed into a half Texan (orginally from Minnesota)

When people form the US visit Europe and are asked where they are from they will say the USA. If a Texan were asked he would say he was from Texas. You are a Texan first........

I will always be half Texan and proud of it, too!

here is a link to better information about the Cistercians
http://www.tshaonline.org/handbook/online/articles/CC/ixc5.html

also here is the link to their webpage