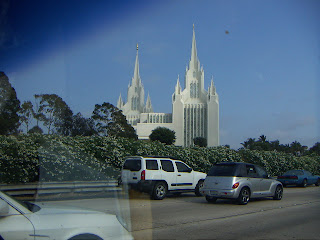 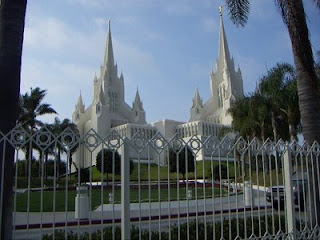 We saw, from the freeway*, this strange building that looked like the palace of the Wicked Witch of the West.
‘What’s that weird building that looks like a Mormon temple?’ I asked. My host said ‘It is, like, a Mormon temple, dude.’** ‘And that angel on the top? He’s called Moroni’
Well there you go then. Nuff said, dude.
We went up to the Fort-Knox-like gates to take a couple of pictures. Mysterious cars whirred around, but nobody objected.

* note my confident use of the local vernacular
** John doesn’t, like, exactly speak gnarly like this, dude, though he is totally rad and a Californian.
Posted by Pastor in Monte at 23:21

We call it "the marriage of church and interstate."

There used to be a second angel atop the other spire. Lightening hit it. What can I say.

Gee....a metal statue, above a spire, not close to taller buildings. Are we surprised?