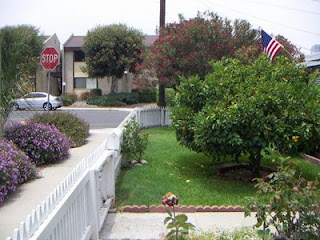 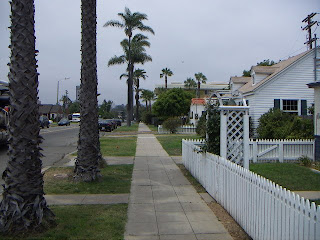 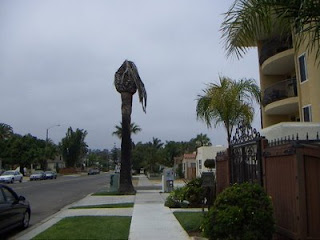 Well, I have to admit that what everyone says is true. San Diego is really lovely. Mostly it’s due to the climate; a steady 70 degrees most of the year round. The book How to be a Canadian says that Canada has only two seasons; Winter and Not Winter. It seems that San Diego has also only two seasons; Summer and Not Summer. John tells me that there is a very occasional frost, but really the atmosphere is agreeable almost all the time.
It most closely reminds me of the French Riviera; there are palm trees, Jacaranda of all sorts of colours, Bougainvillea and Magnolia Grandiflora everywhere. We had lunch at a waterside seafood restaurant by the harbour, and I was completely entranced.
In the pictures of SD suburbia, you can see a typical assembly of plants, including (in the foreground) a Gin-and-Tonic tree and, behind, the Starznstripes tree. The last pic shows the fortunately rare Mullet tree.
Posted by Pastor in Monte at 22:02

I'm really sorry you missed the full on jacaranda season by about 3-4 weeks ago. But here's one I took a picture of last year. It's the "official ornamental tree" of San Diego. Here's a close up from underneath.

Actually we DO have season out here. They are a little different than what you are used to - the cycle works: