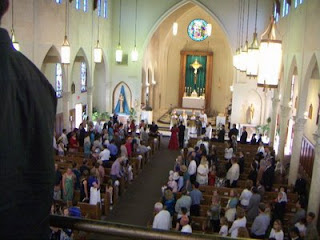 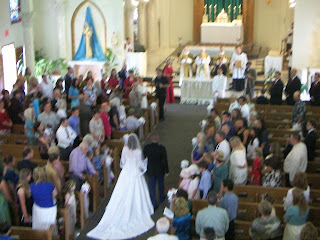 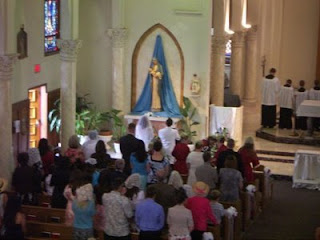 Today I saw for myself an American wedding—although, by all accounts, a distinctly characterful one. I had been drafted into the choir (singers, not liturgical) for the occasion, as the regular singers needed a bit of reinforcement, particularly in the Gregorian chant, which formed a prominent role in the proceedings.
In the UK we are accustomed to a bride arriving on her father’s right arm, followed by a discreet gaggle of bridesmaids with the occasional unruly child. Not here.
First, we said five decades of the rosary for the bride and groom (there had been a delay), then the organ stuck up with Clarke’s Strumpet Voluntary (on diapason chorus). This was the signal for the clergy and servers to process in—there were a lot of them, this being a big occasion, and the Mass was to be a solemn celebration in the Extraordinary Form. The organist continued to play the Crumpet Voluntary over and over again as the bridesmaids began to file in, beginning with the smallest and unsurest, who wobbled her way up the aisle, to be met by an equally uncertain little boy in a black suit and bow tie, who took her arm, hesitated a long time, then wobbled a genuflection, each passing into a pew on bride’s or groom’s side. Then the next bridesmaid repeated the whole thing. When six had walked up the aisle, and the organist’s fingers were nearly falling off, there was a pause, and we thought that finally the bride was coming. But no: a teeny weeny boy and girl wobbled their way up the aisle, dressed as bride and groom. I had a quick unworthy thought about child brides in Kentucky, but once the tots had toddled their way to the top, there was a pause while the organist finally rounded off the seventy-first playthrough of Clarke, and ponderously changed his music to the Pachelbel Canon, played on full reeds. Another bridesmaid appeared and snailed her way down the aisle, meeting the best man at the sanctuary step. Finally, the bride appeared on her father’s arm, she in a long and beautiful dress, he in US Marine uniform. The marriage was a normal traditional marriage, and the Mass a normal solemn nuptial Mass (Premonstratensians from Orange were deacon and subdeacon, looking splendid in their white birettas). At the end, the bride laid her bouquet movingly on our Lady’s altar, while a can belto tenor sang Schubert’s Ave Maria. All very interesting. I pray that they may have many long and happy years together.
Posted by Pastor in Monte at 23:44

"But no: a teeny weeny boy and girl wobbled their way up the aisle, dressed as bride and groom. " Okay...now that one is just not normal!!!! Never saw that before!