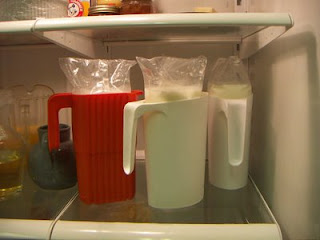 Tomorrow morning early I leave Canada for California. I have no idea whether I will be able to get access to the internet there, so I thought I might try and put down a few impressions while they are still in my mind, stimulated by our lunch of ketchup and maple syrup with a garnish of sausages and french toast (all on one plate).
I have to admit to having conceived a real affection for this place. I suppose that in the past, Canada had existed in my mind as a place rather on the edge of consciousness; I had a confused set of images of Mounted Police (I haven't seen even one), Polar Bears (ditto), Eskimos who prefer to be called Innuit (ditto), and mountains (ditto). Instead, I shall take away with me the warm memory of a gentle and laid-back population who seem to take their religion a great deal more seriously than we do in the UK.
As by now you probably know, yesterday three of us went to Niagara Falls (well, you have to, really). We were all in clericals, but having left my Saturno in Shoreham, my scalp was getting rather red.

By the way, I don't yet have a comb-over; in Japan, a Shoreham parishioner told me, these are known as 'bar codes'.
Anyway, as I was talked into buying a baseball cap with 'Canada' on it, the lady on the till struck up a conversation about what was the difference between 'Catholic' and 'Roman Catholic'. A valid question, because a couple of blocks away from the Oratory here in Toronto is a branch of the Polish National Catholic Church (apparently, the normal Catholic Church in Poland isn't nationalist enough). Anyway, the conversation progressed onto confession, and how it had been a while, etc. We left the shop, and crossed the road. There was a young policeman (not a Mountie) directing traffic with the help of a whistle and a lot of energetic gesturing. He removed the whistle from time to time to abuse motorists loudly, but he cheered up immensely when he saw the three of us. He proudly told us his name (it was Irish), and that he was Catholic, and proud to be so. On several other occasions we were greeted as 'Fathers', or people simply started up friendly conversations. Never once have I witnessed even a single hostile glance, let alone any active or verbal hostility. It is delightfully refreshing.
I gather that the Canadian hierarchy are not much to write home about. There is the noble exception of Thomas Collins, the Archbishop of Toronto, as I have indicated before, and maybe there are other good ones. There seem to be more than a trickle of vocations, and if the philosophy seminary run here at the Oratory is anything to go by, the candidates are generally of good quality and solid Catholic faith. And young (immediately post-high school) vocations are beginning to be accepted again, without the all-too-common patronizing advice to 'go and get some experience' which often translates as 'go and have some sex and sin'.
I am told that, unlike Australia, the republican movement in Canada is not strong (at least outside Quebec). I wouldn't say I detected any ardent monarchism, but people seem fairly content with the status quo.
There may be more reflections if I get time.
Posted by Pastor in Monte at 18:31

Ha-ha...you'll confuse the bejesus out of people when you get here. A guy with a hat that says "Canada" with a name as Irish as Paddy's pig. Irish accent as well still? [you'll confound them even more if it's English...] You'll have to pick up a Hawaiian shirt and a pair of flip flops. BTW, should you so desire, you'll get to see fireworks every night given where you'll be staying. We don't do things by half measures. Safe flight!

Fr Finnegan - are you serious about the ketchup and maple syrup on the same plate?! It reminded me of a comment made to me by a French lady regarding English food. 'You eat jam with meat in England I understand' she said. Mystified I discovered she had been offered apple sauce with pork and had regarded it as jam!