Take me out at a Ball Game 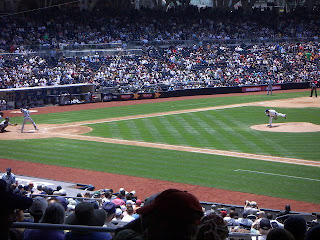 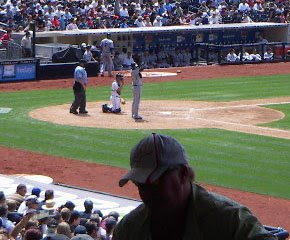 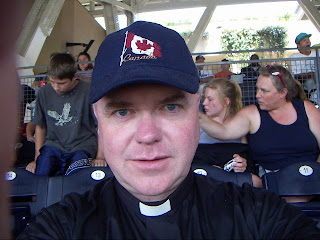 Today I continued my American education. I went to see the San Diego Padres compete at Baseball against the Florida Marlins. I was a San Diegan for a day, and so was disappointed at the rout that resulted. A large part of the crowd left before the end, disgusted.
It's a strange game. We had good seats near somewhere called First Base. Sometimes my young parishioners talk about getting to First Base, and with my suspicious clerical mind, I jumped to the conclusion that they were talking about something naughty. Well now I know better, but I shall warn them that the game looks very dangerous.
The point is that lots of men of varying shapes (and it's surprising just how comfortably built some of these athletes are) dress in pyjamas and disport themselves around a cone-shaped field with a sandpit at one end. One man gets up on the sandpit and cocks his leg. Then, just as you think he is either going to overbalance or relieve himself, he hurls a ball at a fat man a little distance away. In front of this fat man is a man praying on his knees (both of these have masks on their face, presumably to stop them spitting at the man on the sand pile). In front of the praying man (who occasionally rises to a squat) is another man with a club. It is his job to try and prevent the fat man and the praying man from getting hit (he doesn't succeed most of the time) by hitting the flying ball as hard as he can with his club into the audience, conveniently ranged on either side of him. There is a scream of horror from the poor people as the ball flies towards their teeth, and the braver among them try and capture the ball before it can do too much harm. Then they refuse to give the ball back, hoping that this will save their expensively-whiteneds. But, nothing daunted, the man on the sand pile finds another ball and tries again. He gets three goes, and then the man with the club has to run, because the other men in pyjamas try to hit him with the ball. Just after we arrived, one player for the Padres actually tried to run home in fright, egged on by the screams of the crowd. A big sign flashed up HOME RUN!!!, and he got to go and sit in a sort of underground bunker as a reward. Everyone applauded his escape attempt. They didn't let him go home, though. From time to time balls would not succeed in injuring a member of the audience; many people would throw up their hands in surrender, but it was in vain. One of the players was sure to throw the ball at them nonetheless.
The Padres also employed a coach; this was a woman with a powerful voice who sat a row or two behind us, and freely dispensed her advice with a quite extraordinary pair of lungs. It was, no doubt, useful advice. 'Strike one, strike two, strike three', she yelled, though the poor batsman had a job to strike anyone at all, as he missed his shots and the crowd groaned with relief.
Perhaps the strangest thing was the anthem. Everybody had to stand up in the middle of the seventh over and, hand on heart, sing what I suppose is the Baseball Anthem, a moving plea speaking of the fear engendered by that flying ball. I think the words were something like 'Don't Take Me Out At The Ball Game'. The effect was a little spoiled afterwards, however, by the fact that this moving moment was followed by 'Twist and Shout', which everyone did energetically, getting out of the way of the flying missiles. Tragic.
You can see my splendid Canadian baseball cap from Niagara Falls in the picture. I now understand that its purpose is to catch flying balls.
And tomorrow, I will meet that wondrous Gem of the Ocean……
Posted by Pastor in Monte at 03:48

Thank you for your letter from America, quite like Alistair Cook.

Bassball does sound like the English game of "Crickette", equally incomprehensible to the unitiated. I have never understood it, but I think that is my foreign blood.
Do pass on my best wishes to Karen.

You will meet Karen!!!

This is amazing, Father. I have thought all my life that baseball was the same as rounders, with perhaps a bit of stoolball flavour also. This doesn't sound like the same thing at all!

Si, we met today and I took Father out to Sea World -- we had a really good time. I'm staying with a friend this evening and won't have a chance to post any pictures until tomorrow night

Fr. Blake, Fr. Sean is being xtremely "loose" in his take on the game -- VERY funny.

The song "take me out to the ballgame" is 100 years old this year. You can hear it with the introductory verse (almost NEVER sung) by Frank Sinatra and Gene Kelly here.
It was old when they did it.

BTW, it's called "the 7th inning stretch." It became the custom when President Taft was at a ball game once, and in the middle of the 7th inning (there are 9 total) Taft stood up to stretch .. so everyone around him got up out of respect for him, and stood too....so it's been the custom for about 100 years too.

By convention, fans rooting for the visiting team stand at the end of the 6th inning and at the "top" of the 7th inning. There are actually 3 "outs" per side per inning.

[And the pitcher may have to throw it more than 3 times before the ball is put into play.

Fr. Sean's take is hysterical. They really did have nice seats. I gather they did not push any little old ladies out of the way to get any foul balls. I have about 6 or 7 lifetime. I tne previous stadium we used to have seats behind home plate Ball doesn't come there often due to the netting and the way it has to be hit to get there...but we had seats on the aisle and in 25 or so years, you're going to come up with a few!

I`m enjoying your account of San Diego. I spent four days there last June before going on a coach trip round California. I was just thinking last month how nice it would be to go back. Baseball sounds dreadful.

Oh, Fr. Brown, don't take Fr. Sean too seriously as to what baseball's really like. See for yourself next time you're out here. Drive by my blog and let me know if you come out this way again and I'll make sure you get to a game.