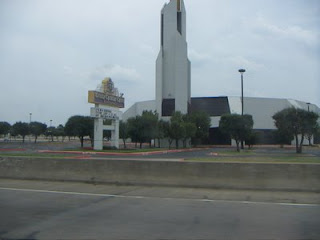 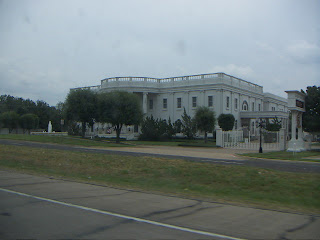 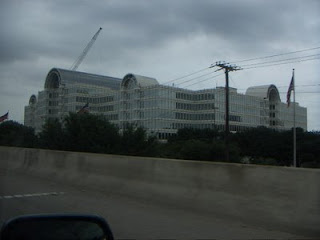 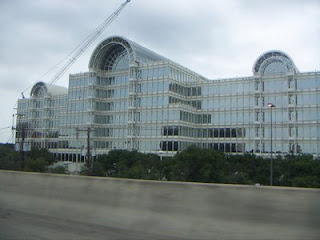 Yesterday was the tour day. In the morning, Professor Gerard Wegemer, the Thomas More scholar, took me on a visit to downtown Dallas. After a hearty US breakfast (and, seriously, were I to eat like this all the time, I would be huge), we set off. Irving, as I mentioned yesterday, where the University is, is a dry county, and this means that it is also the heartland of evangelical Protestantism. In fact it has been described as the ‘buckle of the Bahble belt’. It is also the heartland of the tele-evangelist, mostly with first (I can’t call them Christian) names like Oral, Normal, and Whitening. Well, all right, I made up the last one. Outside one church we saw a poster alleging that all money given to the church is not given to humans but to God. Which sets the priority clearly straight away. Along the road between Irving and Dallas two churches particularly caught my eye; one with a vast spire, which confidently calls itself ‘THE church of Christ’ and another modelled on the White House. Both illustrated left. A little further on, and you see a building familiar to many British eyes, though almost exclusively now in photographs. An American firm has reconstructed the Crystal Palace, sort of, to serve as their headquarters. I knew a man who watched the original CP burn down. Let us hope that that does not happen here.
Posted by Pastor in Monte at 17:49