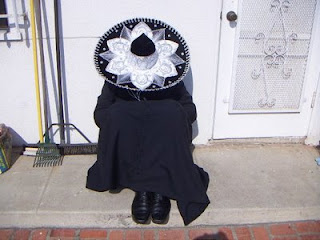 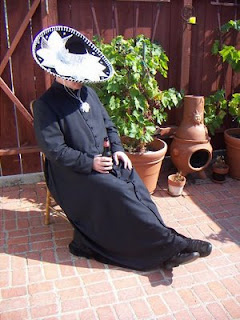 I sit here writing, about 15 miles from the Mexican border. My host assures me that, contrary to my pleading, I really, really, don’t want to go to see Tijuana, which lies just on the other side of the border, in Baja California (the Mexican bit). He says that I could get shot, kidnapped, or even overcharged. But the brothers were moved by my distress and frustration, and sent David, a brother, and himself Hispanic, south on a mission. I had joked about wanting to do the tourist thing, eat chilli and buy a sombrero—I have horrific memories of standing a the airport waiting for visitors to emerge from Arrivals, and seeing hordes of sunburnt British holidaymakers emerging from their flight from the Spanish costas wearing only shorts and ridiculous sombreros. So it was a joke, guys, all right? Only the problem is that the brothers seem to have taken it seriously, and after the Exercises on Sunday, I was presented with a perfectly enormous black and silver sombrero, which David had gone all the way to Tijuana to get for me. It is quite gloriously camp and over the top, so I thought I ought to pose in one or two stereotyped Mexican poses just so you can appreciate it. Getting it home gave me some thought. There is no way I want to emerge from Arrivals at Heathrow wearing that. So John, ever the thoughtful host, said I could leave it here and he would post it. Bless him.
Posted by Pastor in Monte at 00:49

Hey, that is way cooler than a box of chewing gum (bought from pesky and persistent little kids who are trying to help feed their family, gotten while waiting in a long line to cross the border) or a bunch of paper flowers (ditto) -- you could have asked for a bottle of tequilla...but hey, you would have probably had to invite the whole hood over for margueritas or something.

I *have* actually, on two occasions gone down there for the heck of it, all by my lonesome without much of a spec of spanish over "dos equis, por favor" and "Gracias" and have gotten home just fun. But always daylight hours ... a woman has to worry about being sold into white slavery! ;-D

No more, alas, unless I get my passport updated! Until very recently US cits. could cross with just something like a drivers license. Last time I did that when I came back, they *barely* looked at the license and waved me in with a "whaddaya doin' over there, get your hiney home where it belongs..." and nary a glance. But then I look like "The all American girl" so I don't think they were worried about me bringing across anything I shoudn't have!

The question arose on another blog some time ago of headgear to protect priests from the heat of the sun at large outdoor papal celebrations.

One blog (I forget whose) carried a photo of concelebrating priests in albs and baseball caps. Not a pretty sight.

One commenter somewhat impractically suggested an ombrellino be held over each concelebrant.

Another suggested celebrating indoors, out of the sun.

I suggested the sort of sun hat one used to see at the seaside, made from folded newspaper. In this case, I suggested, priests could make hats from copies of L'Osservatore Romano.

But when I saw the photos of Fr. Sean in sombrero and cassock, I realised he had found the perfect solution. Admittedly, for liturgical use, they would have to tone it down a bit with a less extravagant colour scheme.

But if they want to stay out of the sun, and if they don't own a saturno, the sombrero is the obvious answer.

Well done, Father. You appear to have solved a knotty problem.

Carrrrumba! So this is what a chaplain for a mariachi band looks like!

The Brothers were right Father, you don't want to go to Tijuana! I did make the walk many years ago while attending a conference in San Diego, taking in a Jai alai game and drinking a little Dos Equis.

It is very run-down, dirty and dangerous. But it does make you realize why so many Mexicans risk their lives to come to the US. Looking across the border to San Diego from the squalor of Tijuana, who wouldn't want to take the risk?

And it is Kentucky blue grass, Father - which can be purchased in bags of seed at Walmarts throughout the country. Beloved of homeowners, it can make a beautiful lawn - but it doesn't 'take' everywhere!

That's it. Now, instead of a hat tip to other bloggers, or even biretta tips, you have to do sombrero nods...